For anyone with an aversion to tourist traps and the artificial atmosphere of the full moon party, for anyone who loves peace and quiet, untouched beaches and a bit of privacy far from the beaten track, Ko Tarutao is an ideal stop-off on your trip to Thailand.

How to get there

When organising a trip to Thailand, the majority of tourists, when choosing an island, naturally opt for the the most popular tourist spots such as Ko Samet, Ko Tao, Ko Pha Ngan, Ko Samui, Ko Phi Phi, Ko Lanta or Phuket. Just south of Thailand, on the border with Malaysia, is the island of Ko Tarutao, a place often overlooked by tourists and mainstream tourist packages. Its downfall lies in it being just that little bit too far off the beaten track. Getting there from the capital, Bangkok, is certainly not for the faint-hearted. You can expect to travel overnight by either train or bus. You can also expect frequent delays. What's more, you'll have to get to Hat Yai before 1:30 p.m. to catch the last boat. If you miss the boat, you can easily find somewhere to stay nearby and then catch one first thing in the morning. Once you actually get on the boat you will probablybe the only one getting off at Ko Tarutao, while everyone else on board continues their journey to the much more popular Ko Lipe. The good news is you'll have the wonders of Ko Tarutao all to yourself. 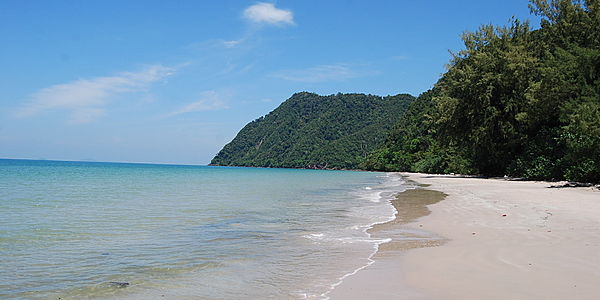 Once you get to the island

Ko Tarutao, in the stunning Andaman Sea, is so beautiful and unspoiled that it is part of an archipelago of around fifty registered islands classed as UNESCO World Heritage sites. On arrival, you will have to pay an entrance fee for the marine national park and you have the option to either stay in a bungalow or to camp on the beach in the shade of the coconut palm trees.

There, on the Pante Bay beach, which stretches for approximately 1.5 km and is the busiest in Ko Tarutao, there will rarely be more than two people at a time taking a dip in the turquoise blue waters. If you still find that level of company too much to bear, you'll find complete solitude following the path through the thick forest that leads you further south towards Jack Bay, Malae Bay, Sone Bay, Makham Bay, Taloh Udung Bay or Taloh Wow Bay. Along the way you'll come across the odd monkey and at Sone Bay you might even get the chance, between December and February, to see the sea turtles come to lay their eggs.

From Pante Bay, you can also take a small path that leads up to the highest point on the island and has breathtaking views over the region.

In Ko Tarutao, happiness is... experiencing complete solitude on an almost deserted island. From the beach you can watch the sun rise and set before your very eyes in a whole pallet of colours and shades.

Ko Tarutao is a paradise lost where nature unfolds in all its original glory.