The best time to travel in Thailand

The best time to visit Thailand is between November and March, when there is much less rain than during the remainder of the year. After that, it all depends on the regions you want to visit and what you want to do while you're there. Simply avoid the rain and be aware that it can be very hot indeed!

Jan
Feb
Mar
Apr
May
Jun
Jul
Aug
Sep
Oct
Nov
Dec
The best season to visit Thailand extends from November to March, when it rains much less than during the rest of the year. In addition, the largest local festivals take place during that time period. Avoid the rainy season, from July to October. Other precautions apply to different regions individually: avoid the center of the country between March and May, where temperatures can exceed 40 degrees and the heat becomes stifling. If you're heading for the northern mountains, the warm season between March and May, or the start of the rainy season, is better, because the temperatures are still pleasant. Whether lounging on spectacular islands or exploring royal cities, you'll be bowled over by Thailand, the former Kingdom of Siam with its abundance of cultural treasures. Head for this wonderfully welcoming country and discover its delicious cuisine.

Customize your perfect trip to Thailand 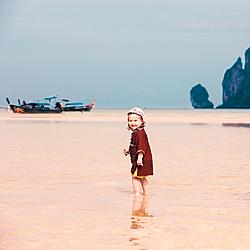 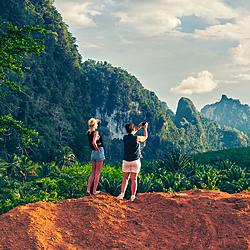 Jan
Feb
Mar
Apr
May
Jun
Jul
Aug
Sep
Oct
Nov
Dec
Bangkok's worldwide reputation is well-deserved: a blend of modern opulence and ancient tradition, the city is buzzing, undergoing a transformation from one day to the next. You can visit stunning temples, and enjoy delicious grilled shish kebabs from street vendors: at least from November to March, when it's not too hot yet! Otherwise, the city rapidly becomes tiring. Most local celebrations also take place during this period. If your aim is to take a trek through the northern mountains, choose the warm season from March to May, or the start of the rainy season in June or July: the temperatures are more pleasant at higher altitudes.

Jan
Feb
Mar
Apr
May
Jun
Jul
Aug
Sep
Oct
Nov
Dec
They know how to party in Thailand! And there are lots of opportunities to do so. In November, festivities are kicked off by the gathering of elephants in Surin and the Lopburi Monkey Festival. The following month features a nationwide celebration of the monarchy, January marks the celebration of the famous Chinese New Year. In February, Chiang Mai hosts its Flower Fetival, where the entire city is draped in flowers for a three-day period. A parade of floats decorated in flowers proceeds through the city to bring the festival to a close. In March, pop and rock groups from throughout Asia come to perform in Pattaya, for the city's international music festival. From March onwards, the succulent yellow mango is celebrated, until the arrival of the more subdued rainy season. If you want to experience Thailand's festivities in full, the best time to travel is therefore between November and March.

Jan
Feb
Mar
Apr
May
Jun
Jul
Aug
Sep
Oct
Nov
Dec
Thailand is a corner of paradise for diving enthusiasts. The enormous range of species and the warmth of the clear sea waters delight visitors, who come from all over the world in search of a marine adventure. The Surin and Similan Islands are among the world's best diving sites, with spectacular hard and soft coral reefs and a wide range of marine species. You can also dive in Koh Lanta for an encounter with manta rays and whale sharks in the Andaman Sea, or Koh Kradan, which is a snorkeling paradise. The best time to dive is between December and April, which represents the dry season for the south-west. Another highlight of the Thai diving landscape is in the south east, at Koh Tao, where the water is shallow and the weather is pleasant all year round. The peak season is in June, July, and August.

Jan
Feb
Mar
Apr
May
Jun
Jul
Aug
Sep
Oct
Nov
Dec
Koh Samui is bursting with places to party, as well as discreet Buddhist temples: it's a city with many faces where you can spend your stay in luxury, or discover local life. It's always sunny from February to April, once the rainy season is over. The period from June to August is the most hospitable, but avoid the period from October to December at all costs, as it never stops raining. Phuket, Thailand's largest island, is a destination for vacationers seeking sunshine or taking a detour via Patong.

Jan
Feb
Mar
Apr
May
Jun
Jul
Aug
Sep
Oct
Nov
Dec
The north of Thailand includes Chiang Mai, the country's second city. Chiang Mai is full of sacred temples and surrounded by mysterious mountains. The local cuisine is extremely varied, with a dynamic, modern twist, yet it has managed to retain its simplicity. In that respect, the cuisine reflects the city itself. It's better to visit this part of the country during the cool season, between November and February: the temperatures are pleasantwhile rainstorms are few and far between. From March to June, on the other hand, during the warm season, the heat can sometimes be extremely unpleasant.

Jan
Feb
Mar
Apr
May
Jun
Jul
Aug
Sep
Oct
Nov
Dec
In the north-east of Thailand, the climate is hot and dry between November and March. The climate is mild and pleasant for visitors during this period, with temperatures that constantly hover around the 25-degree mark. From June to October, there are violent rainstorms on an almost daily basis, and some roads can be blocked from time to time. This part of Thailand allows visitors to discover the country as it used to be, with artisanal silk weaving, landscapes that feature rice paddies as far as the eye can see. Seeing all this while travelling by rickshaw will bring you closer to an appreciation of Thai culture. You'll discover the customs of the country and its most precious heritage, and admire the Mekong River, which has its source near the small village of Chiang Khan.

Jan
Feb
Mar
Apr
May
Jun
Jul
Aug
Sep
Oct
Nov
Dec
Discover waterfalls while rafting, and take a trip on the back of an elephant in Nanchanaburi, which is just outside Bangkok. To the south of the city, Kaeng Krachan Natioanl Park offers its visitors a chance to experience nature and a breath of fresh air. You can also choose to set off in small groups and trek through Mae Hong Son, which separates Thailand from Myanmar. At Koh Chang, tourists can explore the local jungle, while more adventurous spirits can take ride a canoe through Khao Sok National Park! Avoid the rainy season if these outdoor activities are a priority.
70 contributions