Bangkok, the capital of a continent

During your trip to Thailand you will sooner or later spend time in sprawling Bangkok. The capital is huge and it is worth devoting a few days to discover it as best possible.

Origins and a few figures

Huge, sprawling, exciting, intoxicating, there is no lack of adjectives to describe Bangkok. It was King Rama Ie of the Chakri dynasty who made Bangkok the capital of the country. To be more precise when speaking of Bangkok, one should say Krung Thep Maha Nakhornn Amon Rattanakosin Mhindraytthaya Mahadilokrop Noparatana Rajdhani Buriram Udon Rajnivet Mahasatan Amorn Pimarn Avatarn Satit. In English it means "great city of the angels, supreme altar of divine jewels, invincible fortress, vast and sublime kingdom, royal and peerless capital of the nine noble jewels, magnanimous abode of the monarch". Just stick with Bangkok.

Today, it is home to 12 million people or about 10% of the total population of the country. Despite its gigantic size and permanent traffic jams, Bangkok is a vibrant and incredibly endearing city for such an immense megalopolis. More than the capital of a country, Bangkok is without a doubt among the most important cities of the entire Asian continent. 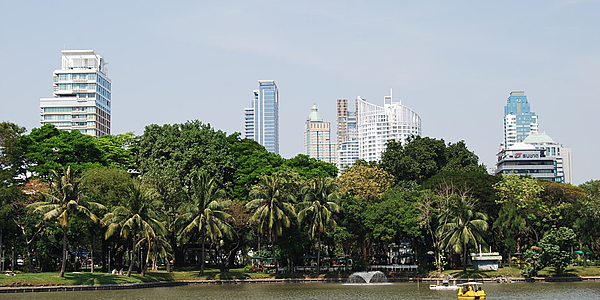 Krung Thep Maha Nakhorn... excuse me, Bangkok, has much to offer. Within its walls, the capital possesses many of the major attractions for tourism in Thailand.

Among the countless wonders, the Wat Phra Kaeo and the Grand Palace are really splendid. The architecture is incredible and the site is full of priceless treasures, like the legendary statuette of the Emerald Buddha that Rama Ie pillaged from the city of Vientiane in Laos.

Another gem that should not be missed under any pretext is the superb Wat Pho. Inside you can admire the 45-metre long reclining Buddha. It is the longest in the world and completely covered in gold leaves.

Those enthusiasts who want to see the most beautiful temples in the city can also add visits to Wat Mahathat, Wat Arun, Wat Saket, Wat Suthat or Wat Benjamabohitr.

Among the different things to do in Bangkok you can go to Chinatown, go up the Baiyoke II Tower and go to a Thai boxing match at Ratchadomnoen Stadium or Lumphini Boxing Stadium. The most beautiful tour of Bangkok consists of an excursion on the khlongs to discover another facet of the capital with its picturesque neighbourhoods and floating markets.

To finish, Bangkok offers the traveller the wildest nights of the continent. Khao San Road is the most famous street in Bangkok. It is simply extraordinary. The atmosphere is insane and it is the focal point for the most incredible aspects of the city, including its most unwholesome and seediest sides. A lifetime would not be enough to discover Bangkok, the capital of an entire continent.