The most popular excursion that you can go on during your trip to Jordan from the city of Madaba is the one which will allow you to discover the region's biblical sites.

Only 10 kilometres away from Madaba, Mount Nebo and its 840 metres of height dominate the region and offer an uninterrupted view over the surrounding landscapes. To ask for the way, you should say that you want to go to Siyagha. It's the first step on the classic tour of biblical sites.

It's quite striking to say that in front of you, Moses himself had the same view over the Dead Sea, the Judaean Mountains, Jericho and the River Jordan. It's here too that he is said to have died, looking at the Promised Land. That's why there's a large iron sculpture here representing his staff.

On site you can also find a sculpture to commemorate the visit of Pope John Paul II upon the last millennium. Here the visit finishes with the monastery, the basilica and its extremely beautiful mosaics. 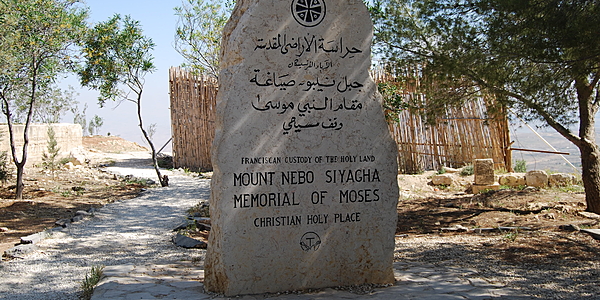 A little further away, around 3 kilometres, it's here that you can find what was probably the ancient town of Nebo.

Khirbet-al-Mukhayyat is said to have marked one of the last stopping points of the Hebrew people as they made their way to the Promised Land. What you'll see nowadays are rather the remains of the ancient Byzantine city. Here you must follow the path which goes up to reach the Church of Saints Lot and Procopius. Inside you can find a very beautiful mosaic.

In Jordan, Bethany is rather known under the name Al-Maghtas. It's here that you can even find the place of Christ's baptism. It's no doubt the most interesting step on this tour of biblical sites.

Just on the other side of the River Jordan, on the opposite bank which you can swim across to here in only a few strokes, is Palestine. Palestine is a full military zone, that's why it can only be visited in a group accompanied by a guide and aboard an official vehicle. It's absolutely impossible to break with the rules.

The first stop of the visit is made at the John the Baptist spring. It was here that the saint baptised Jesus Christ. A little further on the River Jordan blocks your route. You'll probably be a bit disappointed by its size and the brown colour of its waters. It's no more than 5 metres wide here and though, on the opposite bank the Israeli flag flies in the wind, it's Palestine that you're looking at. To finish the visit you can perhaps go to admire the view at the top of the Mar Elias hill though it's not always accessible.