When you get to the archaeological ruins at Jerash during your holiday in Jordan, you will understand why this town is one of the most visited in the country.

You should go to Jerash

Behind the unmissable national tourist sights of Petra and Wadi Rum desert, Jerash is trying to get in on the action. And the least you can say is that it's doing very well at it. Because it is only 50 km north of the capital, Amman, nowadays Jerash has become an almost obligatory stop for tourists in Jordan.

It's very easy to get there from Amman, but also from Ajlun or Irdib, in one of the many buses and minibuses. It takes about an hour from the capital and only 30 minutes from the other two towns. So you don't even have to stay in Jerash, it's quite possible to do the return journey in a single day. 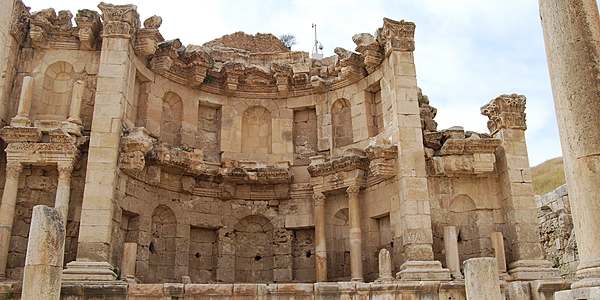 You need to spend at least half a day during your stay exploring this superb archaeological site. Once you are inside you will immediately see Hadrian's triumphal arch. This is the first monument on the site, and your visit begins here.

If you take the usual route, you will then go to the hippodrome, where they still have chariot races. Then you'll see the south gate, the temple of Zeus and the Lapidary Museum. The south theatre and the forum are amongst the most fabulous monuments on the site. Absolutely superb. For 800 m you can imagine yourself an emperor walking along the Cardo Maximus, which is lined with 200 columns.

Then there is the Archaeological Museum, the Macellum - which is also lined with columns - the South Tetrapylon, the cathedral, the Church of St Theodore, the beautiful nyphaeum, the Viaduct church, the propylaea, the temple of Artemis and the Byzantine Church of Saints Cosmas and Damien. The northern theatre is another of the site's wonders.

All that's left then is the North Tetrapylon, and the archaeological site of Jerash has revealed all its secrets to you. And the cherry on the cake? If you would like a good view over the whole site, you can climb the hill opposite the south theatre.