A trip to Jordan is the chance to visit one of the oldest cities in the world. That can seem difficult to imagine at first view, that's why you must take your time to discover all of the treasures which are sometimes well hidden.

From the past to now

Arriving in the capital Amman during your trip to Jordan, you'll surely find it difficult to imagine that this big city is one of the oldest in the region and even in the world. Without even going back far to very ancient times, you should know that in 1920 the big city that you'll be walking around in during your trip was only a tiny village. Its growth has been absolutely exponential for it to reach the 1,600,00 inhabitants that it now has.

When you arrive for the first time in the big capital city, it's difficult to find your bearings at first. Amman actually has the special feature of having been built on the seven surrounding hills and moving from one district to another can sometimes take a while.

To make your visits and get around you'll rarely have another choice than getting on a bus or in a taxi. 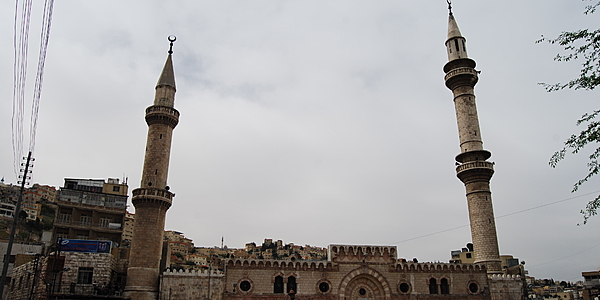 For lots of visitors Amman is just a perfect base to leave from on some nice day trips to the surroundings. Jerash, Gadara, Madaba, the Dead Sea, Ajloun, or even biblical sites are some other places to visit. However it mustn't be forgotten that in Amman itself there are several treasures and wonders to be discovered.

The most beautiful monument can be found on the hill just above the Downtown, the Jabal Al-Qala'a citadel. As well as the various remains and a beautiful view over the Downtown, you can also see the Temple of Hercules and the Archaeological Museum.

Going back down to the city, the big Al-Husseini mosque with its large minarets can act as a navigation point. In that area you can visit the nymphaeum, the forum, the beautiful Roman theatre, the odeon and the Popular Traditions and Folklore museums.

In the Abdali and Jabal Weibdeh districts, the King Abdullah Mosque is considered the symbol of the city. Visits shouldn't be limited to that alone. Darat-al-Funun, Dar Al-Anda, Paris Square or the Jordan National Gallery of Fine Arts are also worth seeing.

In the Jabal Amman district, you must go to the Jordanian House of Culture and Art and to Rujm El-Malfouf.

Choosing your trips according to what interests you, you'll need at least two good days to visit Amman.