In the same way as the archaeological site Petra, or the Wadi Rum desert, the mythical Dead Sea is amongst the must-sees to write on your programme for your trip to Jordan.

How to visit the Dead Sea

When you're preparing your programme for your trip to Jordan, before even leaving for your trip, there's no doubt that you must write down the archaeological site Petra, the Wadi Rum desert, the capital Amman, the biblical sites, perhaps the Aqaba beaches on the Red Sea, Jerash, Ajloun, and last but not least the Dead Sea.

It's crazy how many mythical places there are on Jordanian soil. The Dead Sea is one of them, and luckily due to its geographical position, it's very well connected by different forms of transport. It can be reached by horse from the border with Israel and you won't have any difficulty getting there by bus, minibus or taxi from the capital Amman, from Madaba or from Kerak. It's also possible to reach from Petra but it's much longer.

Also be aware that if you want to avoid the crowds it's better to come on a weekday. Friday is always the busiest day, all the families from the surrounding places come here and so it's difficult to find space on the sand to put your towel down.

Women can forget their smaller, sexier swimming costumes. Unfortunately for your tan the one-piece swimsuit is practically obligatory. It's just a simple matter of respect, and the awkward looks that you would receive would make you uncomfortable anyway.

Also, make sure that you always have your passport within arm's reach. Due to its proximity to Israel, passport checks are frequent.

A last piece of advice, but you'll realise it yourself too that due to the incredible level of salt in the water you absolutely mustn't get any in your eyes or it may burn and you must always rinse yourself off well with fresh water after bathing. 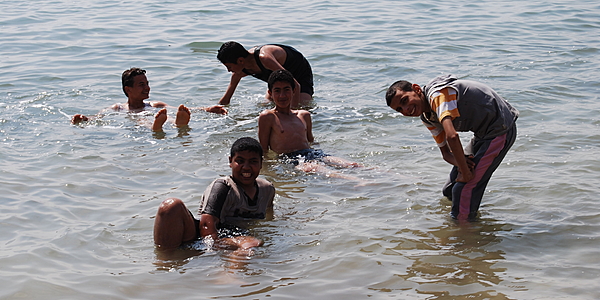 Above all, it's useful to know that the Dead Sea is not called that because it's dead. It's simply that the level of salt in the water is so high that no life is possible here. It's 10 times stronger than the level in oceans and a fish wouldn't be able to live there for longer than a minute.

Unfortunately, there's so much evaporation that the sea practically gets smaller even as you look at it. It's reducing by a metre a year and measures no more than 600 kilometres squared when it was 950 kilometres squared at the beginning of the 20th century. Nowadays it is considered as a catastrophic situation. According to the most alarming scenario, it could have completely disappeared by 2050. Then its name would take on a completely different meaning. That's an extra reason why not to waste time and to have the unique floatation experience as soon as possible.

Actually, you'll notice that it's impossible to submerge yourself completely in the Dead Sea without being pushed immediately back out of the water. It's impossible to sink and the feeling of weightlessness is incredible. The Dead Sea is the only place in the world where you can lie in the water and read your paper as if on a deckchair without even the risk of getting your paper wet. Being photographed like this is a big classic at the Dead Sea.