Pamphylia, the country of all people

Pamphylia was a small coastal region in the South of today´s Turkey, made up of two plains bordered by the Mediterannean sea from the Taurus mountains from the other. It has known its hours of glory under the Antiquity, allowing us today to admire the numerous Hellenist remains, both Roman and Byzantine.

A land for all peoples

Even if the region was discovered by the Acheens, each large city of Pamphylie has its own history and coloniser: Aspendos was made by Argos, Side supposedly by Pelops and Sillyon like Perga were established by Greeks of Arcadia or from Peloponnese.

The Pamphyly known for the successive following of Greek kings, of Egypt, of Romans before becomng Ottoman: today we find the remains of these times in the archeological museum of Antalya or Greek and Roman statues, Byzantine icons are shown inside, contrasting the Ottoman architecture typical of the old town, visible from the exterior. But make no mistake: if the museum and the town of Antalya will please fans of history, it´s the outside of the city where passionate archeologists will find their happiness.

Perge, Sillyon, Aspendos and Side

About 15 kilometres away from Antalya Pergé is found; ancient capital of Pamhylia, abandoned at the end of the Byzantine period. Going into this archeological site, we discover the Greek-Roman theatre with a strikingly well conserved facade and in which certain hilly areas of Antalya are exposed. Further on, the remains of the largest mining stadium of Asia are found, which welcome chariot races, they are more modest than impressive: the bleachers and arcades have endured well but nature has reclaimed them.

Continue one kilometre along to admire the ruins of the city: thermal baths, agora, basilica, fountains and ancient wallks, built in the Hellenist and roman eras. The same architectural influences can be admired in Sillyon with the bonus of an odeon, a cistern and a gymnasium. The city being known by its mercenaries, it forms part of the region but its monuments were constructed several times by the various occupants through the centuries. Close by, the city of Aspendos is known for its its Roman theatre, one of the best well conserved of the Antiquity , still used each year for shows in theatre, ballets and operas.

Side finishes the list of cities having the most beautiful remains of Pamphylia: situated in a peninsula 80 km from Antalya, it was a pirates´ lair, protecting its lands by ancient fortifications and giving direct access to the sea from its headland. Today very appreciated by tourists for its sunsets and its panoramas, it is also a well known seaside resort. 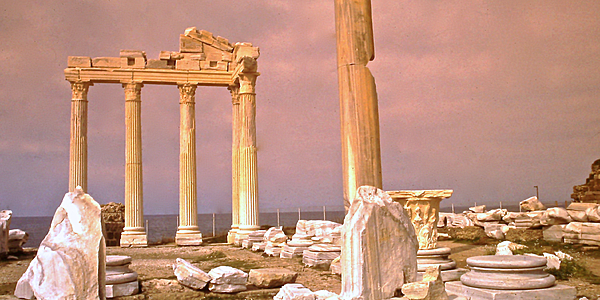 Apart from its antique charms, the region attracts a good number of swimmers and holiday makers. Alternating visits of remains and beaches, the Antalya gulf proposes its lot of adventures between water sports, rafting down the Korpulu canyon or paragliding...Photographers appreciate the cable car of the Tahtali ascent offering a panorama of Turkey at 2500m of altitude. With regard to geologists, they will be fascinated by the waterfalls of Düden where the waters roar into the Mediterranean sea from a cliff, giving Antalya the nickname "city of waterfalls".

The season matters little in order to make the most of the region:it always has a permanent flow of travellers from all horizons, reminding us why it´s the origin of the country for all peoples...