A trip on the planet of Cappadocia

I've dreamed of Cappadocia for a long time. Looking through the photos in the album "Holiday to Turkey" from someone in my family, tracing with my fingertip the unusual shapes of the region, I imagined an endless field of rocks and mountains that only the echo of my voice could get through. Years later, I came to this magical valley, I got lost in its scenery which absorbs light, sound, colours and transforms it all into an immense country of shadows and shapes that only imagination can comprehend. My voice could cross these earth giants, weaving in and out of every corner invisible to the eye. I was on another planet, a dream planet.

A trip to another planet

This dreamlike place seems to enchant all of its visitors, attracting them month after month throughout all seasons. The majority of the inhabitants were born, and have always lived, in Cappadocia. They know all of the ways to get around there, even those away from the beaten path. The locals know that you will fall in love with their land and that you'll go back there one day, looking to replicate the time that you spent there on another planet.

A trip to Cappadocia - whether it's for visiting its open spaces, its underground sites, its caves and enclosed churches - can seem eternal, for once you are there time seems to stand still and hundreds of images and sounds fill the space.

The Cappadocia region is situated on the central Anatolia plateau, where nature's forces have sculpted mountains and valleys around the cities of Nevşehir, Ürgüp and Avanos. Other volcanic formations are also visible in Karain, Karlık, Yeşilöz and Soğanlı. The distance between Cappadocia and Istanbul is only 730 kilometres and yet the changes of landscape are extreme, giving the impression of having gone thousands of kilometres further, of being transported to another planet.

On this planet you'll be able to find, in Çavuşin, at an altitude of 1050 metres, the 274 metre path going up towards Mount Bozdag, from which the volcanic range surrounding the Cappadocia region is easily visible. Two inactive giants rise up, Mount Hasan at 3916 metres high and Mount Erciyes reaching 3253 metres.

Then, the White Valley and the Uçhisar valley are two stretches of land which give onto an arid plain, full of rock sculptures. Then we have Pigeon Valley, where cliffs come one after another and the pigeon houses carved in evoke those promises of love and of prosperity that men made to the family of their future wife. When you're in the Red Valley, you'll be able to admire the sunset. A çay, a carpet, some adventurers paragliding, silence, and a valley so beautiful that you'll want to get lost in its abysses.

Finally, there are also green spaces, where waterfalls and marshes give out fascinating noises. Paths take shape in the Aladağlar National Park and continue towards the solitude of Soğanlı. Take a moment to forget about rushing around seeing the sites and fully enjoy these places. 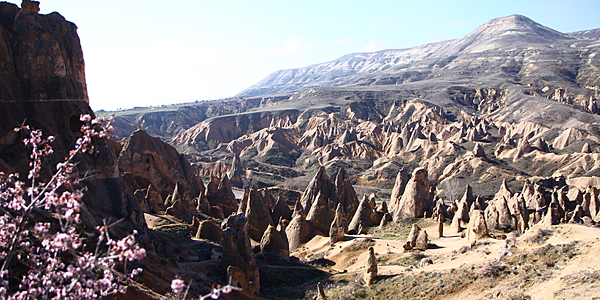 On this planet, some sites are further away than others, some are more popular or not really recommended for those who are scared of the dark or of enclosed spaces. It will unfortunately not be possible for someone who is claustrophobic to go underground, to go down from level to level under the soil and see how communal living took place in these narrow, confined spaces. In these underground spaces, everything was built and conceived of so that men could live in the best possible conditions: spaces for the work animals, spaces for the preservation of food, bedrooms, churches, hidden doors in the case of an attack from Roman, Persian or Mongolian invaders, etc..., and even rooms reserved for grape fermentation to produce wine! Why would you want to move!

Once you've exhausted all of the walks and tourist visits, the region offers quite a large selection of formerly inhabited caves turned into wine bars where the region's products are highlighted. Don't forget also to try the famous 'testi kebab', although it's quite hard to find an authentic one nowadays...

Finally, one last piece of advice before coming: keep an eye on the weather. I came in March and there was still snow, and a glacial cold accompanied by rain which made the visit a bit difficult. However, the winter landscape of this 'planet' has a captivating magic. I must have had one of the most beautiful days of my life: the landscape, walking, good friends, new discoveries. Knowing that even though this region has constantly been altered, built and rebuilt by man, it remains a haven of harmony where the natural landscape and man are one, makes this little corner of Turkey an essential place to visit.

The planet of Cappadocia is one of those rare places on Earth where immensity inspires, evokes, makes you dream.

©
Clémence Zisswiller
Authentic promenade in the districts of Kadiköy