The journey to get to Hasankeyf is magnificent. From the outset, visitors feel the senses of isolation, freedom and wonder. The River Tigris tirelessly widens its passage. It maps out the curves of the cliffscrowned by troglodyte constructions whilst the surrounding fields are invaded by sheep moving slowly. Welcome to Hasankeyf, ephemeral splendour.

If you are travelling in Turkey and you have a bit of time to explore this superb country and get out of the mapped out tourist paths, Hasankeyf will be one of your nicest surprises. Although this city is a touristic destination for Turkish people living in the surrounding areas, it still remains relatively unknown among foreigners. So the first positive point is that your visit will seem more authentic. In addition, the city hasn't changed much for a while and therefore is still very traditional, surrounded by an enchanting nature throughout the year.

A city and numerous archaeological sites

Before even going to visit the city, on your journey you will come across the Mausoleum of Zeynel Bey, built in 1473 and of a style similar to central Asia, merging very well in the landscape. After that you can can head on foot towards the River Tigris weaving in and out of the cliff that it has shaped for thousands of years. You can then go into a small hamlet leading you to a bridge over the river and alongside the ruins of the old bridge, one of the most impressive of its era, built in the 12th century by Artuqids Turkmens and was knocked down in the middle of the 17th century. Before crossing the bridge, if you wish, you can sit down on rugs in a sort of comfortable yurt overlooking the river and the city.

Once you have crossed Hasankeyf's small lanes and market, you can visit the al-Rizq Mosque build in the 15th century, which is very well preserved. It will already seem like you are going back in time.

Now there's just the stone Citadel to explore. Don't take the traditional route, because although there aren't many tourists on the usual route, this hidden route is much more adventurous, much more in line with the area's spirit. By circumventing the main entrance on the left and going through the old city (also to be visited before or after) you will arrive at the base of cliffs and will find a family serving tea in the middle of this fantasy landscape, in the open air. From there you will be able to see red arrows, covering the rocks. That may seem strange as a piece of advice but follow the arrows! They will take you through the canyon made of stones and will guide you to the top where you can admire all the troglodyte constructions, the River Tigris, the old town and you will be alone, surrounded by nature. By far one of the most phenomenal sights I had the chance of seeing. 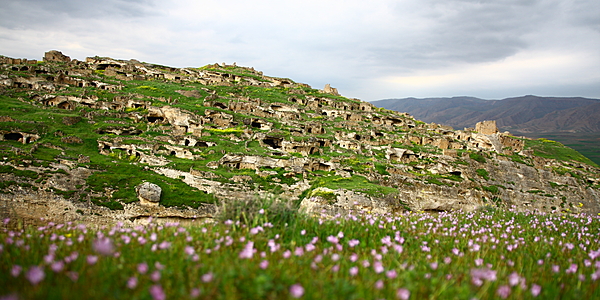 When heading back down you will finally be able to wander about in the districts of the old town where you will come across other ancient mosques, and diverse ruins, as well as extremely friendly locals.

A heritage in danger

All the gems that I have just spoken about, all the archaeological treasures, the ruins, magnificent landscape, places of worship, the areas where people have lived for hundreds of years, everything, absolutely everything is going to be destroyed, submerged by the waters which hold up the Ilısu flood barrier.

A rich, ancient history (that be traced back prior to the 10th century, witnessing the succeeding domination of the Byzantines, Muslims, Artuqids, Ayyubids, Mongolians, Aq Qoyunlu, the Ottoman Empire and finally the Republic of Turkey) is in the process of being annihilated.

In addition, this flood barrier also signifies the displacement of 60,000 people, living in this area, next becoming the "lake". The locals are incidentally in the process of reoccupying the troglodyte sites as a sign of challenge with the authorities. The protests come one after another but the State isn't moving, at least not for the time being.

So hurry up, rush to this magnificent place and, if you have the strength, do what you can to prevent the destruction of this paradise on earth.