Set aside at least a half day to lose yourself in the Pettah bazaar in Colombo. The tradition of markets has been going strong here for centuries and promises exploration during which all your senses will be on overdrive. The streets are packed with shops selling anything and everything, from little trinkets to baskets of fresh mangoes, from CDs to the latest trendy T-shirt.

Losing yourself in the narrow streets

From the Colombo Fort railway station, take the walkway that spans Olcott Mawatha and lose yourself in the crowd of the bazaar. Start your walk by going up Cross Street 1 with its little stalls selling sunglasses, flip-flops and beach equipment. If you turn right on Prince Street you'll find yourself more or less in the centre of the bazaar. Be aware, melt into the crowd and observe.

Young girl in a sari wandering round the shops, business man in a hurry looking for a new tie, housewife haggling over an ounce of cinnamon for the evening meal. The streets soon become chock-a-block and you start to wonder how you're going to squeeze your way through. The shops are continually resupplied by delivery men pulling old wooden handcarts, taxis hoot their heads off and an auto-rickshaw is trying to take two tourists to their hotel.

As you walk towards Main Street make sure you stop by the Al Jami-Ul-Jaffar Mosque, also known as the red mosque. Higher up, on your right, turn into Sea Street, where all the jewellery shops are. i would advise you against buying anything here unless you're accompanied by someone you trust. There are a lot of scams. Look up at the end of the street to admire the coloured kovil of the Kathiresan Hindu temple. 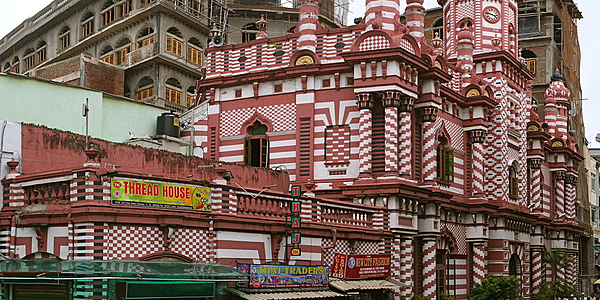 As you go up Maliban Street on the other side of the neighbourhood, you'll come across an old market hall where they sell all kinds of fruits and vegetables. The stalls are full to bursting and sure to give way under the weight of the produce. Go through the door of one of the little shops on the edge of the square and try one of the snacks. Rotties, patties, cutlets and vadai will tickle your taste buds. However, take care if you don't like spicy food. Don't be afraid to stop at one of the many pavement stalls and try Sri Lankan street food.

The bazaar at night

As often happens in Sri Lanka, the buzz of the Pettah bazaar reaches its height in the evening. People jostle each other on the pavements and squeeze through the narrow streets at the centre of the neighbourhood. Men armed with loud-hailers harangue the crowd, repeating the same slogans over and over again. All kinds of street sellers and hawkers start to set up shop here, there and everywhere, taking up every square inch of the pavement. If the crowd gets too much for you, you can always escape by taking the walkway that leads to the Fort neighbourhood, by the Khan Clock roundabout.