An enchanting visit to lake Ladoga

Whether you aren't yet familiar with Nordic beauty, or whether you know and love it, spend a few days relaxing on the shores of lake Ladoga! Situated just 50 km from St. Petersburg, this immense lake, the largest on the European continent, still somehow manages to lose itself in the vastness of the North. With its somewhat jagged and rocky coastline, the large expanses of forest bordering it, its rural setting, its huge size and the islands there, Ladoga is a haven of peace. There, you can go bathing, venture out by boat, walk along its banks, climb the rocks around, appreciate the gems of human heritage such as the monastery of the Transfiguration or the Orecheck fortress: this large Baltic lake has charms aplenty.

One of nature's giants

Just like Russia, Lake Ladoga is immense. It's a vast body of fresh water, 17,700 km2, close to the Baltic Sea and on the doorstep of the great forests of Russian Karelia. The product of glacial movement, it forms an open circular mass, in contrast to other major Finnish-Russian lakes, which often have irregular contours, forming arms or straits.

There are two ways to explore this beautiful lake: firstly, you can cross it by boat. Out on the lake, you'll be able to take in the view of its untouched banks, especially those on the North side, picturesque rock faces carved by the lake, forming numerous coves. It's also the best way to explore the Valaam islands, with their untamed feel and rock formations, and the other islands in the northern part of the lake. You can also head 'offshore', where it feels like being out on the high seas. The other way to explore is of course to go on foot, walking from beach to beach, from cove to peninsula. Although the southern side, with its beautiful beaches, is better suited to seaside activities, it's the northern side you should choose if you're looking to lose yourself in the Nordic wilderness and observe the wildlife: elk, brown bears, lynx and birds. 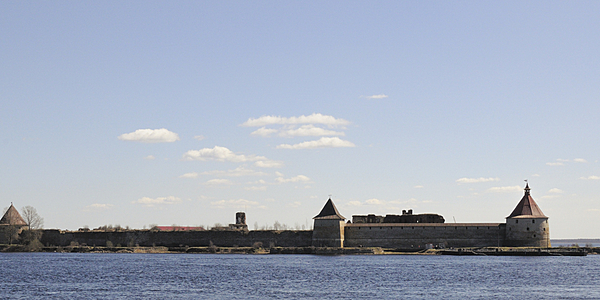 Despite the solitary feel of the High North, lake Ladoga is a highlight of the Russian North-West, right next to St. Petersburg and close to Finland. Historically, it was the territory at stake as rival groups fought for control of the region: the Russians (notably the people of Novgorod), the Swedish, the Varangians and the Finns. It constituted the Swedish-Russian border during the Great Northern War, before Russia took full control.

The Orecheck fortress, built on an island near the former city of Shlisselburg, guards the mouth of the Neva. Its well-preserved heritage testifies to its history. Listed by UNESCO, the fortress and old town are high-quality sites. The Orthodox Church has also been able to appropriate the wild islands of the lake to provide peace and serenity to its monks. Dotted around the lake are some very beautiful monasteries, such as the one on Novevets island, dating from the 14th Century, or the monastery of the Transfiguration on Valaam island. Finally, there are the charming fishing ports such as Sortavala, Siastroï and Novaya Ladoga.