From palaces to monasteries around Moscow

Within a radius of 100 kilometres around Moscow, the distance which separates the Russian capital from the first Golden Ring cities, you'll find jewels of Russian art, religious or civil places which contribute to the grandeur of the huge Slavic country's civilisation. The historic birthplace of modern Russia, Moscow invites you to do a tour of monasteries and palaces. From the Trinity Lavra of St. Sergius to the Kremlin in Zaraysk, as well as the Arkhangelskoye Palace, here are some beautiful day trips to make from the capital, or places to stop off if you're heading to Yaroslavl, Tver or Vladimir.

The Trinity Lavra of St. Sergius

Only 70 kilometres from the Russian capital, one of the most beautiful monasteries in the country is awaiting you. The Trinity Lavra of St. Sergius is located on the way to Yaroslavl, another main stop off point in central Russia, which also makes it an easy place to get to. Arriving from a distance, over the plains, you'll already see that the imposing silhouette of this white lavra (a type of hermitage in the Orthodox tradition) with gold and blue domes starts to appear. There's no less than fifteen extravagant domes which come to light up the Muscovite plain. Without contest one of the high points of Russian architectural art, the Trinity Lavra of St. Sergius was built in the fourteenth century. Andrei Rublev and other masters of religious icon art worked there, making it one of the great centres of this style of art. Listed as a UNESCO World Heritage site, it's also a great museum centre as it hosts a museum with a vast collection of paintings and religious art objects.

Ideas for where to go to see the little wonders of Orthodox art are not lacking in Moscow, as the region hosts a wealth of sites with great historical and cultural value. The New Jerusalem Monastery in Istra is another giant of Russian art, an architectural treasure which hosts marvellous icon art. In the middle of the forest, the Ascension of David Desert monastery is a powerful place which holds the tombs of several Russian princes. In Zvenigorod, the Savino-Storozhevsky Monastery, loved by poets and artists, is another amazing sacred place.

The Moscow region is also full of palaces and manors, former secondary or main residences of the important names of Russian society. Only 20 kilometres to the west of Moscow, the Arkhangelskoye Palace, the former residences of the Yousoukovs, is an amazing neoclassical castle surrounding by a beautiful park. Transformed into an art museum, it has a huge collection of paintings, sculptures, and rare books. If you go to Zaraysk, the 16th century Kremlin, well preserved, will reveal to you its lively history. Then there's also the poet Alexandre Blok de Chakhmatovo's manor, now a literary museum-house, or Abramtsevo's manor, the former centre of the Slavophilia movement in Russia... 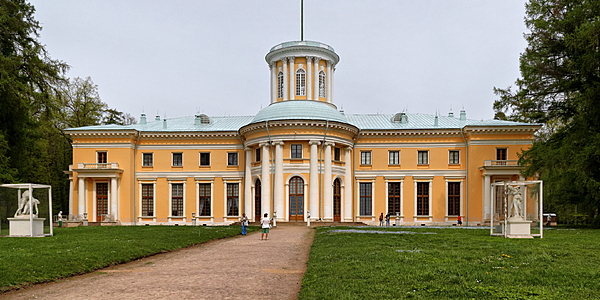