A visit to the Kremlin

Paris has the Eiffel Tower, New York has the Statue of Liberty, and Moscow has the Kremlin! This absolute must-see is not only a place where a large number of the most beautiful historic monuments in Moscow can be found, but it offers a view of the pomp and power that is so typically Russian. The presidential residence, which was the Russian centre of power each time that Moscow was the country's capital, is an impressive fortress—encircled by red walls—, which overlooks Red Square on one side and the Moscow River on the other. From far away, it is all you can see in the centre of Moscow, with its towers, its church towers, and its golden domes. With its museums, its churches, and its palaces, you will need a full day to tour it. It will take you back to the age of Imperial Russia, as well as to the time of the USSR with Lenin's Mausoleum, and will show you that it is still the essence of power in the most vast country in the world.

The Kremlin is a political and religious sanctuary. Since the 14th century, the Dukes of Muscovy, then the tsars, have endowed it with all the attributes necessary to showcase their power. The first sign: their fervour. It's no surprise that churches are so numerous in this secular fortress; these are also the monuments that will be the easiest for you to visit because they are freely accessible. Cathedral Square is one of the heights of Russian Orthodox art, where the golden domes press up against the gate. The Cathedral of the Dormition and the Cathedral of the Annunication, both of which date back to the 15th century, are masterpieces. Their interiors house marvellous iconostases. There is still the Church of the Twelve Apostles and the Church of the Deposition of the Virgin's Robe...

The palaces are not to be outdone: the Palace of Facets, the Terem Palace and the Grand Kremlin Palace flaunt luxurious monumentalism. But, since it is used for political and governmental purposes, it is not open to the public for tours. Still to be seen are the 20 towers in the ramparts of the Kremlin Wall: Ivan the Great Bell Tower, the Kremlin Arsenal, the Kremlin Armoury, etc. 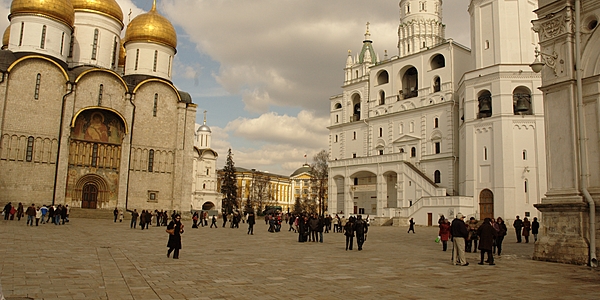 The Kremlin is also a major museum site in Moscow, plunging the visitor into the world of Russian history and fine arts. The Patriarch's Palace displays sacred objects, icons, pieces of furniture, and varied creations from its era: the 17th century. The Kremlin Armoury houses one of the most beautiful collections of armour in the world, along with the treasures of the Kremlin. It is exceptional. The State Historical Museum is a must-see for those who want to understand this giant structure.

Finally, Ascension Belfry always accommodates temporary exhibitions dealing with Russian art and culture. But the most eagerly anticipated tour was on the other side of the high walls, adjoining them: Lenin's Mausoleum. This cult site—in all senses of the term—, built from red granite like the ramparts themselves, is more than a tomb; it is a symbol, a rite of passage that is almost obligatory for all visitors to Moscow—even the most anti-communist ones!