This hot desert region in the north of Peru is a must-see for all lovers of ancient civilisations. Come to see this region so full of history, without forgetting to make the most of it's seaside and natural amenities.

The province of Lambayeque is located on the northern coast and in a desert, but you need to know that apart from the desert it has some beautiful beaches. So it's in this perfect setting that you will discover the north of Peru. The town of Chiclayo, an ideal and central point from which to set off on your visits to the archaeological sites in Lambayeque, is about a 12 hour bus ride from Lima.

Lambayeque and its archaeological heritage

Here are two major sites that you'll be able to see during your trip to Peru:

Firstly, the archaeological complex of Huaca Rajada, better known by the name "Señor de Sipán", who was a member of the royal family of the Moche, a pre-Incan civilisation whose heyday was between the 1st and 5th centuries AD. If you are interested in this history, there is also a museum that retraces the history of the Sipan tombs to add to your itinerary. Here you can see a collection of objects found in the tombs.

The second archaeological place of interest is Túcume, also known as the Valley of the Pyramids. The strong point of this area is that it highlights traces of all three civilisations that once occupied the region. The culture of Lambayeque, is in itself descended from the Moche, the Chimú and the Incas. In total there are 26 adobe pyramids in the valley. Even though the ruins are in a fairly poor condition, it's good to be accompanied by a guide during your visit because there's a great deal to learn about the history of the area. 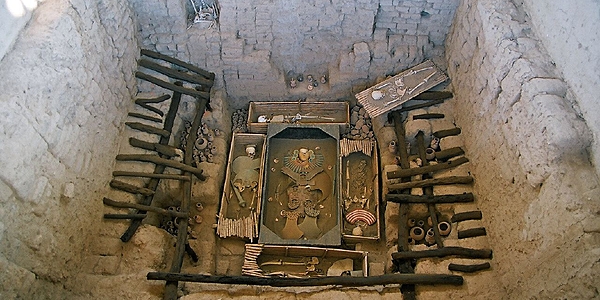 Would you like to move away from all the archaeology and discover Lambayeque's natural attractions? There are lots of options for you here and this is one of my favourites!

The Chappari reserve is about an hour and half's car journey from Chiclayo. This reserve isn't State property, as is often the case, but that of the Muchik Santa Catelina de Chongoyape, who live on the land. In fact it's the first private conservation area in Peru.

The aim of the members of the community was to preserve not only the dry forests but most of all the biodiversity of the area. The community living in the reserve lead a sustainable lifestyle, especially with regard to the use of natural resources. The area is also home to many animals that are on the verge of extinction and one can only applaud this tiny community for having wanted to preserve their rich natural heritage.

©
ONG Latitud Sur
In the heart of the Amazon rainforest: Iquitos and its floating shantytown
More articles