As you arrive from abroad by air your trip to Peru will begin in Lima. With its 10 million inhabitants, its the constant noise, a decidedly grey sky, and the pollution from all the cars that hits you first. However, looking beyond that, there are many little gems to be found in the capital. Allow me to tell you about some of the unmissable sights..

First of all, go the Plaza de Armas, the colonial heart of the capital. It's a must-do during a visit to the capital of Peru If you are there around midday you'll see the changing of the guard at the Presidential palace, as the soldiers put on their little show to the sound of the brass band. Not far from the palace is the impressive cathedral, the very same one that Pizarro ordered to be built when he arrived in Lima in 1535. It's also from the Plaza de Armas that the tours leave to go to Cerro San Cristobal, a high point that offers a superb view over Lima and its outskirts. 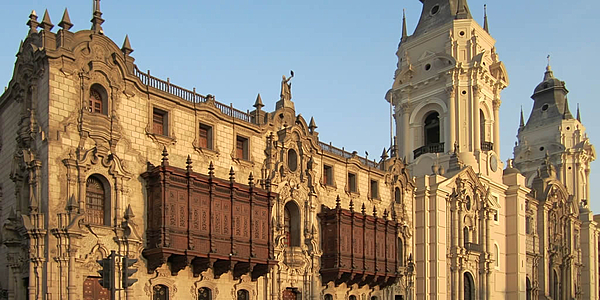 After having visited the historical centre, go south towards Miraflores, the elite neighbourhood of Lima It's here that most of the gringos gather, the foreigners that come to live in the metropolis. There is a most unusual park here that's worth a visit: Kennedy Park. Its peculiarity is it that it's home to fifty or so cats. Near here, if you walk to towards the sea, you'll arrive at Larco Mar, a commercial centre that faces the ocean. It's not the best place to shop for bargains, but worth seeing all the same!

Even further south is the magnificent Barranco neighbourhood, my favourite place in Lima, definitely one to put on your Peruvian itinerary! Here a different atmosphere reigns; it's calmer, far from the hustle and bustle of the town. There almost no cars, the shops are lovely and the seafront is as romantic as can be! Go to the "Puente de los Suspiros", the Bridge of Sighs, and take a romantic walk down to the sea at sunset. You'll be spellbound as musicians and street vendors await you at the belvedere.

For the most courageous amongst you, why not go to discover another side of Lima by leaving the modern neighbourhoods and visiting the outskirts, or "cônes" as they are called here? Most of Lima's inhabitants live in the capital's suburbs, as a result of the rural exodus. Towns such as San Martín de Porres, Comas and San Juan de Luriguancho are much less wealthy areas than those previously described but nonetheless they reflect the environment and living conditions of the majority of Lima's residents. Go north, south or east on the "Metropolitano" and you'll soon see the sudden change of scenery. However, if you go into these neighbourhoods make sure to take nothing of value with you because thefts are quite common here. And don't hesitate, if you're tempted by this experience, to employ a local guide!

©
ONG Latitud Sur
In the heart of the Amazon rainforest: Iquitos and its floating shantytown
More articles