Go to see the cherry trees in Tokyo

When someone mentions the name of Japan, an idyllic vision of cherry blossoms often comes to mind. The tradition of observing the blossoms, the hanami, holds an important place in Japanese culture.

What is a hanami?

In Japanese, hanami literally means "flower viewing". This custom dates to the Nara period of the 8th century, when the nobles went out to admire the plum and cherry blossoms. Today, the blooming of these trees still holds an important place in Japanese culture. From the end of February, you can see bulletins in underground stations giving information about the plum and cherry blossoms, with the different stages of development from budding to the withering of the flowers. On many TV channels you can see reports on the different places where you can find sakuras

Blooming varies from one year to another, so it is difficult to predict the best moment to admire the cherry blossoms. The sakuras first begin to bloom on Kyushu and the last trees bloom on Hokkaido, with several weeks in between. In Tokyo, the plums begin around the end of February and the cherries from the end of March or beginning of April. It doesn't last long, a week to ten days, and wind or rain can cause the petals to fall.

Today, celebrating hanamiin Japan is the occasion to meet with friends to drink (a lot) and eat. Traditionally, the Japanese bring a blue plastic sheet, and sometimes go very early in the morning to reserve the best spots. In this case, it is often up to the younger members of the group to look after the spot until the arrival of their senpais(elder colleagues and friends). If the weather is threatening, they hang teru teru bozu in the trees to thwart the rain. As for the food, they often bring trays of sushi and maki, edamame, senbeis (rice crackers), kebabs, strawberries... it's a real moment of friendship that lasts several hours. 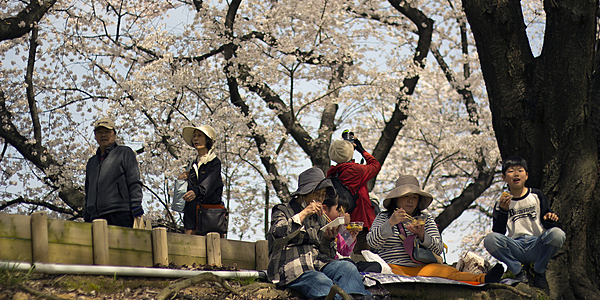 Where can you go to see the cherry trees in Tokyo?

- Ueno park is one of the most popular places in the city for the hanami.Several hundred cherry trees create the impression of a flowery sky. It's very popular and crowded but worth a visit. You'll find many stands that sell kebabs and other things to eat. You can also rent a boat for an excursion on the lake.

- Meguro kawa. This is one of the most popular places in the evening, when it is lit up by lanterns all along the river. The cherry trees form a pink canopy of flowers. It's a rather trendy area, so in addition to the traditional beer you'll also find wine and champagne.

- Shinjuku koen. There are a lot of varieties of cherry trees in the park. If you arrive a little before or after the peak blooming season, it's the place where you'll have the greatest chance to see cherry blossoms because it is home to both early and late varieties. Do not bring alcohol if you plan a picnic there, as it is forbidden and bags are checked at the entrance.

- Aoyama. This cemetery near Roppongi is a good place to see dozens of cherry trees and is one of my personal favourites. The atmosphere is nothing like our British cemeteries - many people go there for a picnic under the blossoming trees.

-The imperial palace is famous for its cherry trees situated above the moat. During the day, you can rent a boat and wander the moat among the fallen petals of the cherry trees.

Outside Tokyo, the Kairakuen gardens in Mito, about one hour east of the city, is the perfect place to admire the blossoming of hundreds of prune trees. You can also see them in Kamakura, or at the top of mount Takao, one hour to the west of Tokyo.