The geishas - a particularity of Japanese culture

What could be more mysterious than a geisha? Behind their sophisticated make-up, hairstyle and kimonos, the geishas - or geikos, as they are known in Kyoto) - hide many a secret! These Japanese muses are above all artists who dedicate their lives to the practice of the arts. These Japanese ladies of company are trained to entertain their customers with their song, dance, music and conversation. But being a geisha is a real profession, and not an easy one! You will surely come across and recognise them during your trip to Japan. But where and how?

Altjhough there were many more of them during the 18th and 19th centuries, there were only about 17,000 geishas left in the 1980s and their numbers are in constantly decline. Few of them are professionals. Today it is still possible to meet and talk with a geisha, more easily so in Kyoto, where they are called geikos. For example, go to Pontocho Alley or the Gion district during the evening, where you will have the greatest chance of meeting one of these ladies. But the area is very touristy. Otherwise, you can go to one of their shows at the Gion Corner Theatre in Kyoto. Every evening at 6 p.m. throughout the year, they enact the many arts that they master, including the tea ceremony, dance, music and song. It's also very touristy, but it is a sure way of seeing geishas in Kyoto.

But hurry before the tradition disappears and they become nothing more than a tourist attraction. Above all, be respectful and abstain from taking pictures unless they give their prior agreement.

How can you recognise them? Nothing could be easier, could it? Well, things aren't so simple. In fact, more and more Japanese women disguise themselves as geishas. Appearances can be deceiving! 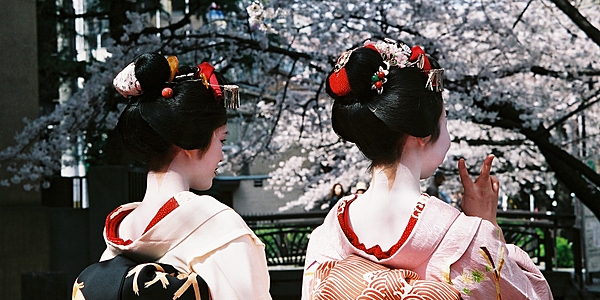 First of all, the kimono! They are worn as tight as a corset and are hand-made in silk, of course (they're worth a small fortune!). The colours of the kimono adapt to the seasons. Young geishas wear bright colours, while those over 30 wear more subdued colours. The kimono is so tight that it requires a male professional, the dresser, to help the geishas put on their costumes. It's his job to tightly knot the fabric in the back.

But it takes more than a kimono to make a geisha. Let's take a look at the make-up and hairstyle, the pure white that the Japanese associate with beauty, the bright red and dark black. A hairdresser prepares their straight black hair in a bun for a week (that is why geishas sleep on wooden neck rests), or they wear a wig. The make-up changes according to experience: at first very heavy, it becomes more and more sober. Their faces are white (thanks to a rice powder foundation), while their lower lips are red and their upper lips are white (and gradually redden with experience). They deepen the black of their eyebrows.

Geisha, first and foremost a profession

The history of the geishas began in the 18th century, in 1712 to be more precise, and was derived from two distinct professions. Their direct ancestors were the taikomochi, a male profession. These were a type of medieval Japanese jester who were employed to entertain the customers of tea rooms with their songs or music. But there was also a female profession, the courtesans, who were similar to prostitutes and worked in the streets or brothels.

This is when the art of the geisha developed. The women who wished to become geishas had to follow a very strict apprenticeship in traditional Japanese arts, song, music, poetry, the tea ceremony, etc. They could thus entertain and keep company with very refined gentlemen, often from the upper classes, who had very high expectations. During their first years of training the geishas were known as maikos.

Geishas had to be elegant, refined and sophisticated. Above all, they had to be experts in the art of conversation, which was a requisite of their trade.

In 1779, due to confusion and a poor reputation, the Japanese government decided to differentiate between prostitutes and geishas: the first could have sexual relationships with their clients, but not the geishas. In reality, many prostitutes, especially the oirans, claimed to be geishas in order to attract men.

Once they had been differentiated from other professions, the geishas lived in specialised neighbourhoods, the hanamachi or kagai. They lived there in an okiya, a house run by a woman called an okâsan (mother) who dealt with the public (never contact a geisha directly!). They lived with 5 or 6 geishas (necessarily single), children (future geishas), feminine helpers, and a servant to escort the geishas and solicit customers. There was also a prostitute in every okiya until 1957, the year when prostitution was prohibited. Their job is regulated: fixed working hours, uniforms, code of ethics, pay, etc. 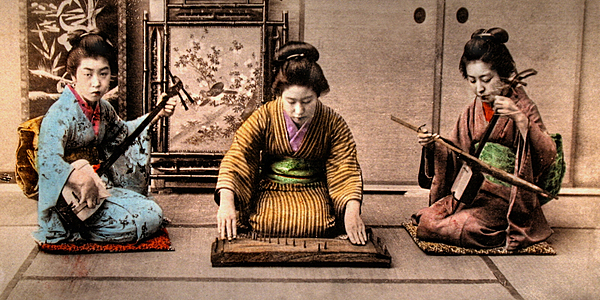 So, take advantage of your trip to Japan to discover the world of the geishas! And if you're not lucky enough to meet one, you can always bring home the necessary for a tea ceremony or an instrument, like a stringed shamisen, to delight your friends Japanese style...