Macau's casinos are well-known in Asia, and its huge, soulless, brand new casinos mean it is on the way to becoming Asia's Las Vegas. Fortunately there are still places like the old Lisboa Casino, which you absolutely must go see even if you aren't a fan of these "dens of iniquity". I found myself plunged into the 50s, with triads, prostitutes, grey, smokey gaming rooms...an adventure that I would recommend...But Macau is not just that... 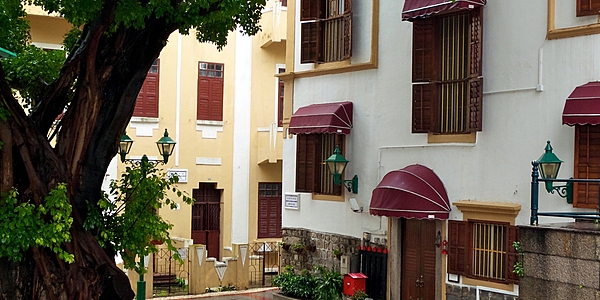 A crossroads between Europe and Asia

Unlike Hong Kong, the old city of Macau has preserved a good part of its heritage from the Portuguese colonial era and is inscribed on UNESCO's list. I felt a bit like I was in Portugal: the architecture, the food (salted cod and egg tarts - yum!), the street names...and yet no one spoke Portuguese...during my first visit I tried to use the few words of Portuguese that I know...big mistake, no one understood me, because here we are in China and we speak Chinese!

Have you had an overdose of Chinese tourists? The solution....

You quickly understand that Macau is a highly prized destination for the Chinese: casinos and a World Heritage site create a powerful cocktail for the continental Chinese. The crowds are dense in some parts of the old city, in particular on the junction of St. Paul Ruins and Senado Square, or at the A-Ma temple, another obligatory stop for organized tours...

However, once we were off the beaten track we were almost always alone: Moorish Barracks - no-one, the magnificent Mandarin's House and Lilau Square next door - no-one... It was the same story a few hundred meters from the tourist traps: at the beautiful buildings on Saint Augustin Square - no-one, in Lou Kau's house - almost no-one...I quickly discovered that Macau has a tranquil, provincial side to it, especially when compared to Hong Kong.

The south of Macau

I found this feeling of tranquility was particularly true on the south of the peninsula. I love leaving Senado Square and walking in the lanes until I reach the Pousada de Sao Tiago, a luxury "Relais et Châteaux" hotel in a 17th century Portuguese fortress. If stopping there is outside the budget, I suggest you try their "High Tea", (an English style afternoon meal with scones, tea and more...), on their shady terrace to restore you after the kilometers you have walked...I made the most of it to look around the hotel a bit, especially the charming small chapel of Saint Jean, a great place.

As I live in Hong Kong, Macau is a great place to escape - a city that lives at 50 miles an hour rather than 100, for those who like to get off the beaten track .