Why go to Shanghai?

Shanghai was home for me for two great years and the city will always have a special place in my heart, but not only there...this international financial hub of 25 million souls also has a special place in China. Rejected for being not Chinese enough, or adored because of its economic dynamism, it rarely leaves people indifferent. If you take the time to understand it, Shanghai will touch your heart. Let me explain why to you.

You have to know about Shanghai's past to understand its present

A river crossroads, Shanghai, (which means, word for word, on the sea ), remained a modest seaside port until the 19th century. In 1842, when the Chinese were defeated in the first Opium War, its fate changed. Shanghai became one of the five ports that were open to foreigners, the Concessions were created. And so began Shanghai's hour of glory, in the place where the West met the East.

A luxurious city and the capital during the Mad Years, the town had the largest foreign community in Asia and attracted Chinese from all over the country. Nicknamed the Pearl (or Paris) of the East, Shanghai was smoldering and cosmopolitan. Capitalism was at home there, banks were built along the Yellow River (on the famous Bund ). In 1922, Albert Londres, (a famous French journalist and writer), wrote about its financial obsession in The Madness of China :

In Shanghai, you make money. It's the be all and end all. […] Banque, Bank, Banking, Banco. Ten, twenty, one hundred, two hundred. That's all there is. You don't dare look up."

Shanghai developed intellectual theories. Chinese traditions were confronted with western ways of thinking, which encouraged new ideas - the Communist Party was formed there in 1921. At the same time the town was a mixture of all sorts: in a capitalist economy, opium and prostitutes sell well. It didn't last: Mao Zedong's China banned this form of western depravity. Shanghai plunged into a sleep that lasted almost five decades.

It wasn't until 1990, and the creation of Pudong Economic Zone on the east of the river, that Shanghai regained its place among the major cities, not only of China, but also of the world. Where in the 1990s there had been a few warehouses there are now the tallest towers on the planet. Today, I can confirm... 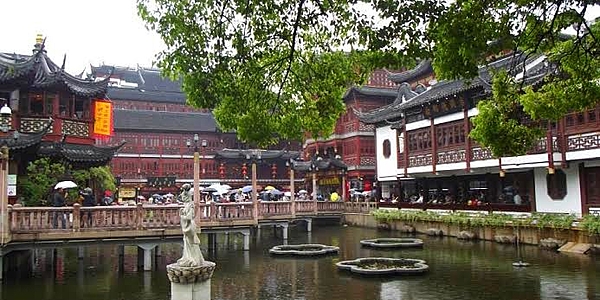 Shanghai has recovered its former rank, surpassed it even.

In Shanghai I could live western style and I went to cafes and clubs that were just as good as those in European capitals.

Why not try a unique experience: while walking around the Art Deco and neoclassical buildings on The Bund, you can watch the amazing towers of the Pudong skyline grow. From one month to the next these skyscrapers push as far as the eye can see...Just a few steps away you can plunge onto the bustling Nanking Road, Shanghai's temple to shopping.

But Shanghai is a city of contrasts. It also has a Chinese soul, or at least a Shanghainese one, which you can find wandering through squares and the city's typical narrow paved alleys, known as Lilong. Washing hangs from the windows, men with white goatees chat on the sidewalks. Get up early and go to the city's parks where you'll see the Shaghainese doing tai chi and other activities. Walk under the plane trees of the old French Concession and look for colonial buildings.

Shanghai also has pleasures for the palate: taste the seafood, or try the cuisine from another Chinese province, the choice is rich and varied. If I have to recommend just one thing as the taste of Shanghai it would be shengjianbao, those stuffed grilled dumplings filled with a delicious jus. Whatever you do during your stay in Shanghai, don't miss the little stall of 260 Jiaozhoulu in the Jing’An quarter. The address is nothing special, but for less than €2 you are guaranteed an orgasm for your taste buds!

Bustling, bubbling, fizzing? The only way to really describe the indescribable energy of Shanghai, where the future is writing itself in front of your eyes, is to stay a few days in this unusual city...And I'm sure that afterwards you will agree with me that there are endless reasons for going to Shanghai !