The different faces of Gulangyu

Exploring Gulangyu wasn't my original destiny. I had come back from a family trip to Fujian and my parents had had enough of backpacking, they needed a rest. We were in the center of Xiamen which we were leaving three days later. I hadn't anticipated going there and I had no information about the town. I was talking with our friendly driver, Mr. Wang. After sifting the possibilities, we pitched on Gulangyu island. I had never heard anyone speaking about it before, mistakenly I soon realized...

The surprises of Gulangyu

My first surprise on getting off the ferry: the island is covered in luxuriant greenery and old houses. I wasn't expecting anything, so I was pleasantly surprised.

I understood that Gulangyu is a unique island in many ways. Gulangyu has kept its colonial houses (more than a thousand villas spread over the island's square kilometer, as I would learn later), an unusual thing in China, where they don't hesitate to get rid of the old to rebuild better. There isn't a single modern construction to disfigure this harmonious collection. Another remarkable thing is that cars are forbidden on the island. Used to the appalling volume of Asiatic towns, I was happy to hear it!

However, I should mention that we were far from being the only people there. Gulangyu is only a few minutes ferry ride from Xiamen. There are lots of tourists here, an awful lot, and they are all well equipped: hats, gloves, and masks to protect themselves from the sun, flag and loud speaker so they don't lose their group. It doesn't matter, the place is really beautiful, so we decided to stay, and I would see if I could manage to avoid the crowds of tourists.

From a consulate turned hotel to a Taoist festival

Our hotel was a former consulate, built in 1844. A beautiful square building made from colored brick...big bay windows, old parquet floors, and private balconies - I knew we would love it. Leaving my parents to rest I went off exploring. The main roads were busy. I needed to get away. I decided to go to the heart of the island. I took the narrow lanes, edged with luxuriant greenery and centuries old trees. Some of the buildings are completely restored, others are in a state of disrepair. I prefer the latter, their dilapidated walls seem to have more to say. A little further on there was a religious ceremony. A surprise. Time to celebrate. There were lanterns, incense filled the air, prayers were written on small pieces of red paper, and a pile of food placed in front of the temple. The Taoist gods (as well as their disciples, I hope) would not go hungry that evening.

I spent the rest of the day walking in an attempt to escape the noise of the tourists. Then the last ferry left, the noise did too, the air got fresher, and the island fell into a sort of torpor. After a delicious sea food meal, I dreamed deeply inside the walls of the old consulate. 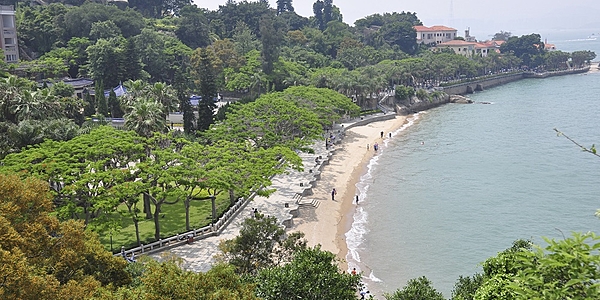 From morning musings to the newly-weds' beach

I got up before sunrise. I am selfish and I wanted to have the island to myself. Gulangyu is very beautiful in the dawn light. The rays of the sun pierce the dark green of the grasses. Under the bright blue sky the white and pink walls are tinted with gold. My only companions: the birds and a few early workers. I saw a decrepit church here, a totally restored baroque facade there. I imagined how the island was in the 19th century, one of the few Chinese ports open to the outside world, its boats taking the tea chests towards the far away West...

Back to reality, the first tourists were arriving, I went back to "my" consulate. Watching the Chinese get off the first ferries, a scene caught my eye: opposite me, all the things needed to renovate the villas were being taken off big boats, and then carried around the island on the backs of men... Gulangyu's tranquility has a high price!

Torn between dreams and a painful awareness of reality, I went back to my parents. Later on we walked down more usual roads, like the pleasant path that circles the island. At the end of an alley we came to what will remain for me the "newly-weds' beach". Opposite us, in the setting sun, dozens of young Chinese couples were being photographed. It was the details which struck me: under the wedding dress, a pair of ugly, but comfortable, flip flops; behind a "spontaneous" photograph, a team of five jumping through hoops to make sure there was no-one else in the picture of the couple, as the beach was quite crowded. Altogether it was impressive: a crowd of married coupes and photographers, all dedicated to creating their memories of a lifetime.

My stay on Gulangyu was short, but I liked the rhythm there. The hours resembled each other as they passed. I was lost in the island's gentle torpor.