Sometimes something very small can determine your choice of destination.

How I came to be meditating in a forest of megaliths

In the middle of April, I was in one of my favorite restaurants in Shanghai talking to some of my Chinese colleagues. I didn't know where to go at the end of the month. Why not Hunan? The food there is so delicate, so delicious. Cold beef rolls with garlic and chili, chili pork chops, prawns grilled with Sichuan pepper, and melting aubergines, were some of the flavors surrounding me...there must be something interesting to see in the region?

I bought tickets for Changsha, the regional capital, that same evening - I was going to see what you could do in Hunan. By talking and researching on the forums I found out that there is a famous natural park, Wulingyuan, (also called Zhangjiajie), close to Changsha. My destination was fixed.

I went by myself. I wanted to submerge myself in this unknown region, as well as in the present moment. "In China you are never alone", someone said to me when I was traveling there for the first time. This tour would be an opportunity to see how accurate those words were.

I arrived early at Changsha airport with a good day's traveling ahead of me: shuttle bus to get to the station and then bus to get to the park. I had two hours before the next bus was leaving. Just two hours to get a feel for Changsha. The Hunan Chinese live outside a lot and their skin is tanned by the sun. In my opinion the people of Hunan have a different attitude to the other Chinese in the big cities of eastern China: they have direct, questioning gazes. Changsha is crowded and noisy, typical of any big Asian city.

I had to go back to the station already. It took four hours to get to the town of Zhangjiajie. On the bus, an old man had his grand daughter on his lap. Apart from when they fell asleep for a few minutes, both of them stared at me for the whole journey. The old Chinese man hardly spoke to me. When we were getting off, however, he couldn't let me go off to look for the next bus on my own, and he went with me to the next station to be sure that I didn't get lost. With such a good escort I easily found the bus which was going to take me to the park: Zhangjiajie Senlin Gongyuan (Zhangjiajie forest park). It was 6 pm, after a long day's travel I had arrived at my destination.

I checked into a little hotel on the main road, opposite the entrance to the enormous Wulingyuan park. This park covers some of the Wuling mountains, which are classed as a UNESCO World Heritage site. The Wuling mountains are famous for the sandstone pillars which emerge out of the tropical forest. There are more than 3,000 pillars in the park's 360 km², some of which are more than 200 meters high.

I bought a map to try and sort out my location. Mr. Li, who I met in the hotel's lobby, offered to help me. I understood that he was a guide and I explained to him that I didn't want a guide. It didn't matter, he was just happy to meet a Frenchwoman who could speak Mandarin. So we spent nearly an hour talking about what would be the best itinerary for me. My temporary guide created a made to measure program from the (very) numerous trails in the park...My two days of walking were mapped: which was a bit of luck for someone who wanted to walk alone but had no idea of where to go!

After a light dinner I went to bed early, there was long walk waiting for me the next day... 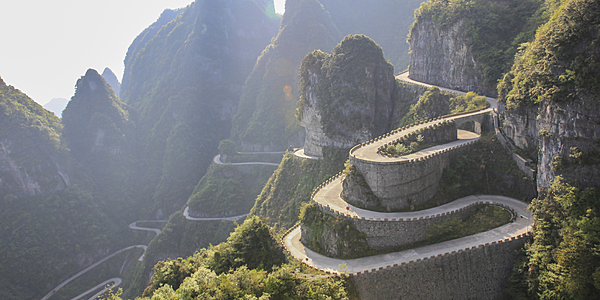 Falling under the spell of nature

There I was in the middle of Wulingyuan natural park...Mr. Li's trail was perfect. My first two hours walking along the Jian Bian Xi river were a true communion with nature, with the sun coming up and the animals waking up. The sound of the river seemed to tell me where to go. It was the perfect start.

The walk was quite strenuous as Zhangjiajie's paved pathways seem to go up and down for no reason. The trail he had drawn meant I was often in the middle of nature and far enough away from other people...Here I need to add a bit of explanation: although it may not be well known to westerners, Zhangjiajie natural park is well known to the Chinese and crowds of them go there. The most famous "spots" are overwhelmed with tourists. It was a holiday weekend and the sun was shining - I wasn't the only one who wanted to see the beauties of Wulingyuan park and I had to live with it. But happily, my route often took me away from the crowds, and I had some beautiful moments submerged in nature. I was alone in an ocean of nature. Opposite me, and as far as the horizon, were waves of rock and greenery. In places there were cherry trees in flower, and the landscape was often punctuated by running water, gorges, and pools. The further I went on my walk, the taller and more slender were the sandstone pillars. The further I went, the more I fell in love with the scenery. The view reminded me of the landscapes on traditional Chinese painted scrolls. All I needed was a painter or a bearded sage and the cliche would be complete.

After seven hours walking I found a hotel on Tianzi mountain, very close to the magnificent site of Shen Tang Wan. I went to bed not long after sunset, delighted and exhausted, my senses still alert...

Delighted by a sea of stones and greenery

My second day's walking began in the center of Wulingyan park, and it began early. I set my alarm for before 6 am to avoid the tourists and make the most of the quiet around dawn. I went back to Shen Tang Wan which I had liked so much the night before. I was alone in nature, surrounded by mountains, trees, and birds. The rocky pillars were often several dozen meters high. Just in front of me, like a forest of sandstone stalagmites, they were dry, slender, and powerful. Greenery was hanging off them in places, and a few brave trees and bushes perched high up. From time to time a very daring tree stuck out from the sandstone, giving it an oddly beautiful profile, very typical of those old Asian prints that we westerners remember. I loved the sea of stone and greenery. My morning meditation was about how magical nature can be...

I continued walking. Further on I met a guide. Like me, Mr. Chen was waiting for the bus which would take us to the next stage. He was guiding a young Cantonese woman on a visit of He Long Gongyuan. We got on well. Mr. Chen suggested that I go with them. As he knew the park very well, he could show me some beautiful sites that were a little hidden away. He Long Gongyuan is one of the most crowded areas I saw in Zhangjiajie, probably because it's also one of the most beautiful. There is a wide panorama over an abundant sea of sandstone pillars. One of the benefits of being with someone who knows was that Mr. Chen took us to quieter areas that were just as breathtakingly beautiful...

After a last walk alone I arrived at the southern gate of the park. The descent took me more than two hours and, happily, I didn't meet anyone. Harmony with nature restored again...Mr. Li had really given me good advice. I was very grateful for the trail he had created for me two days before.

In the middle of the afternoon I started back to Changsha. It was going to be a long and laborious trip. When an (awful) lot of Chinese go home after the holidays if has an effect on the traffic...

At the end of my journey two new Franco-Chinese friends were waiting for me: I had met them on a forum when I was preparing my trip. There aren't many French people here. They wanted to meet me and had arranged a dinner in a restaurant in Changsha. Although I was very late, Pierre and his wife, Qinqin, welcomed me warmly. After long hours on the bus it was a real pleasure to be met by friends and enjoy eating Hunan's delicious food!