Sydney, its bay and its cosmopolitanism

Take your time during your trip to Australia, Sydney is an incredible city where it is worth spending as much time as possible.

You might as well know that if a visit to Sydney today is guaranteed to delight all visitors during atrip to Australia, this certainly was not the case at the time when the city was called Port Jackson. In those days, people didn't go there for tourism but were sent there to years of forced labour in the penal colony. When he passed through the bay in 1770, James Cook found no charm or interest in the place, preferring to land in Botany Bay. It took another 20 years before Governor Phillip took an interest in Port Jackson and drove away the Aborigines.

The cosmopolitanism of present-day Sydney is legendary, being the home of over 4 million people, i.e. more than 20% of the entire population of Australia. It is now a beautiful city, with the most beautiful bay of the world, and an energy and dynamics that is without comparison among all the other cities of the country. To top it all off, the climate is pleasant throughout the year. 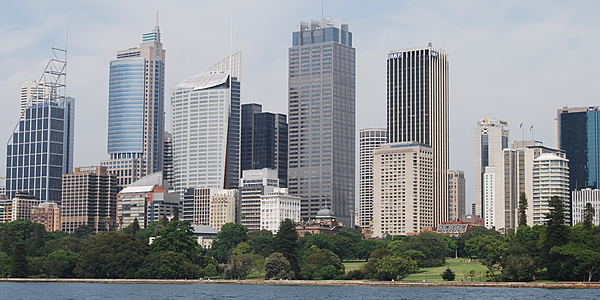 What to see, what to do

Don't try to fool yourself, unless you plan on staying here to live, you will never have time to see everything in Sydney.

To travel around the city you can take the bus, the underground, the famous monorail for its aerial views and ferries to cross the most beautiful bay of the world.

The most beautiful neighbourhoods to visit are the City, the Rocks, Paddington, Kings Cross and Oxford Street.

Sydney will also delight your taste buds. The cosmopolitanism of the city is mirrored in the dishes and you can easily do a world tour of culinary specialities.

Among the wonders to admire, don't miss the sublime Opera House with its architecture that recalls the sails of a boat. You can admire it from the top of Harbour Bridge, another symbol of the city. For an overview of the city, climb the 250 metres of Sydney Tower. Among the other architectural masterpieces, don't miss the Great Hall, St Andrew's Church, Elizabeth Bay House, Vaucluse House, the Queen Victoria Building, Quarantine Station, Fort Denison, Cadman's Cottage, Susannah Place, Hyde Park Barracks, the State Library of New South Wales, Government House, Parliament House or the Sydney Town Hall.

You will also find several rich and diverse museums in Sydney. Among the most interesting are the Sydney Jewish Museum, the Justice and Police Museum, the Powerhouse, the Museum of Sydney, the Mint, the Australian National Maritime Museum, the Art Gallery of New South Wales and the Museum of Contemporary Art.

Once you have finished your cultural tour, you can sunbathe or surf on Manly and Bondi beaches. For a restful break, Sydney offers huge parks where the greenery sharply contrasts with the concrete of the buildings. To take advantage of this breath of fresh air, go to Botany Bay National Park, in the Royal Botanic Gardens or Centennial Park. That is Sydney in a nutshell: cosmopolitan, multi-faceted, sometimes quiet and peaceful, sometimes overflowing with energy.