Kangaroo Island: a feeling of freedom on an island of outstanding natural beauty

To the south of Adelaide, Kangaroo Island is one of the wonders of Australia. You can admire the exceptional natural setting and free-roaming animals. Take out your camera and head for adventure!

Let yourself be enchanted by these unique landscapes

Isolated from the rest of Australia, Kangaroo Island was lucky to have been preserved from seamen until the nineteenth century. The island has something magical, almost dreamlike, about it. With its 18 natural parks, this little piece of paradise will surprise you with its unusual landscapes and its many wonders.

You can admire its breathtaking views as you drive along the coast. Hidden bays, steep cliffs, typically Australian bush, green hills and white sandy beaches are only a few examples of what you can expect during a trip to Kangaroo Island.

Among the sites that are not to be missed: the Flinders Chase National Park which houses many true treasures of nature. It is there that you will find the Remarkable Rocks, the emblematic site of the island. These large boulders have been eroded by the wind and the sea and stand as if by a miracle. A little piece of advice - go there at sunset to admire the colours and to soak up the unique atmosphere. It is a place where one can only stand in awe at the power of nature. A little further on, you can admire the New Zealand fur seals in the little cove of Admirals Arch, another marvel of Kangaroo Island.

For a dip in the crystal clear waters of the island, go to Stokes Bay or Emu Bay. Or, for a bit of adventure, head to Little Sahara. Tucked away in the centre of the island, these huge white sand dunes are astounding. You can go sand boarding here, or in other words, you can surf on the sand! 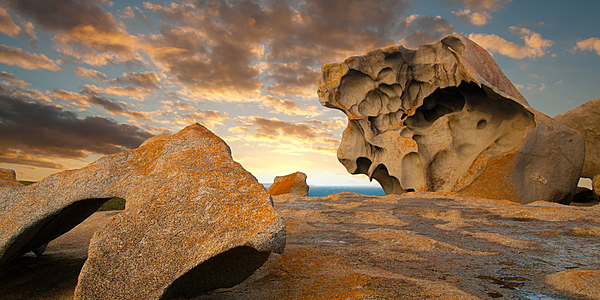 Many wild animals have taken refuge on Kangaroo Island. Far from everything, but especially far from the many predators which are present elsewhere on the continent, wallabies, kangaroos, penguins, koalas, echidnas and birds can live there in freedom without feeling threatened. A true paradise for the traveller who can admire the wild beauty of these animals and observe them in their daily lives.

During an excursion to one of the many national parks on the island, you are likely to encounter a wallaby at a turn in the path or a koala sleeping in a tree. To see the Australian sea lions, an endangered species, go to Seal Bay beach where you will be able to approach them (under the supervision of a guide). A guaranteed unique moment!

You can also see the pelicans and giant cuttlefish at Kingscote Wharf. In Cape Gantheaume National Park in Murray Lagoon, observe the ducks, swans and waders. Finally, in the evening, don't miss the penguins of Kingscote and Penneshaw. These adorable animals spend their days fishing, but return to their "home" at dusk.

Diving enthusiasts might well have found their Eden here! The waters of Kangaroo Island are the home to sea dragons, seals, dolphins and more than 270 species of fish. Divers come from the four corners of the world to glimpse the rare leafy seahorse!

Kangaroo Island is a world apart. 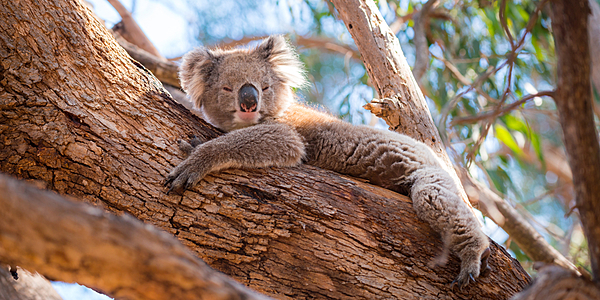