Blue sky, red earth and rugged landscape, the Kimberley is a little treasure that Australia continues to keep secret. Discover the magnificent landscapes from Broome to Purnululu National Park.

Broome - its sunset, its beaches and its camels

A pearling town located to the west of the Kimberley in the north-west of Western Australia, Broome enchants travellers with its breathtaking sunsets and dreamlike landscapes.

Far from anywhere, there is something uniquely magical about Broome that will sweep you away. Stroll through the famous Chinatown area to buy a pearl as a souvenir and visit the pearl museum to learn more about the history of the city. Continue your discovery of Broome with the Japanese cemetery dating from 1896. There you will discover the history of the Japanese immigrants who came to Broome to farm pearls.

To push your romantic side to its limits, take a ride on a camel on magnificent Cable Beach and watch the sun go down over the Indian Ocean. If you are lucky enough to be in Broome from March to October on the night of a full moon, don't miss the incredible Staircase to the Moon of Town Beach. It is a spectacular natural optical illusion. The reflection of the moon on the sea forms a staircase that appears to climb to the sky. Don't miss these magical moments for anything in the world.

Budding archaeologists will go hunting for dinosaur footprints at Gantheaume Point. The red and ochre cliffs fall sharply into the Indian Ocean, which reveals the footprints of these extinct animals at low tide. 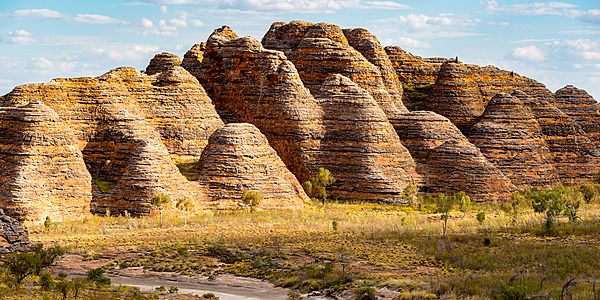 Situated on the border of Western Australia with the Northern Territory, Purnululu National Park can only be discovered by 4WD vehicles, which you can rent for yourself. Also known for the Bungle Bungles Range, this park is on the UNESCO world heritage list and remained a secret until its discovery in 1983!

An unreal landscape unfolds at the end of a sandy track. Domes of orange and charcoal coloured sandstone, which resemble gigantic beehives, appear in the far distance, as if from nowhere. These are the Bungle Bungles, which formed over 350 million years ago from the sediment of a former river and bacteria. You feel very small standing at the foot of these "rock piles" which reach a height of over one hundred metres. Inside the park you will discover rare animals and natural tropical pools. A dreamy landscape, few tourists, only nature! True adventure! Apparently, the view from a helicopter is just as surprising. I will let you try it out it for yourself...

Purnululu National Park is bursting with countless treasures. In the north, narrow gorges offer a dazzling spectacle and are the starting point for a hike to the Echidna Chasm or Palms Gorge, which shelters an aboriginal fertility cave. To the south, a hike towards Cathedral Gorge awaits you. You can also enjoy canoeing on Lake Kununurra, climb the red rocks and observe freshwater crocodile, bats and wallabies.

You can also sing to test the incredible acoustics of the places. Finally, you can visit the ranch where the Baz Lurhman film Australia was set, and discover the beautiful, magical and unique outback.