Horse racing, archery and wrestling are the festival's three principle sports. If you're there mid- July, its a must-see during a trip to Mongolia. Fun and a fighting spirit prevail during the celebrations!

The origins of the Naadam, which means 'festival' in Mongolian, go way back in time. This ancestral festival has always been a major event, having being celebrated in one fashion or another throughout the centuries. Whereas today it commemorates independence, the Nadaam was originally a festival dedicated to gods and ancestors, with sacrifices being made in their honour.

The festival grew in popularity during the reign of Genghis Khan where ritual ceremonies gave way to Olympian-style events including horse racing, archery and wrestling. The army's finest horsemen, the most courgeous soldiers and its highly skilled archers were chosen to take part in the games.

Later on, whilst Mongolia was under Manchu rule during the 17th Century, the festival returned to its religious roots and numerous Buddhist rituals were incorporated into the celebrations.

It was following the 1921 Communist Revolution, when Mongolia declared its independence that the Naadam took on its modern form, namely a celebration of freedom. However, the fall of the USSR in 1991 and the end of Soviet rule saw the Naadam further evolve; no longer just a celebration of independence, the festival began to honour Mongolian warriors, notably the iconic Genghis Khan.

Today's festivities are held in every town in the province, with nomadic communities arriving from afar to watch or participate in the games. The most famous Naadam celebrations are in Ulan Bator, where heaving crowds fill the stadium to enjoy the numerous events.

Horse racing is the major attraction during the festival. Being able to handle a horse well has been genetically engrained in the Mongolian ethos for centuries. As we all know, Genghis Khan's army comprised of fierce warriors who conquered vast territories on horseback. A Mongolian without a steed is unimaginable and horses are both admired and respected. They therefore take pride of place during the Naadam.

Races are spread across two days and divided into categories - yearlings, colts, and stallions. Each horse is handled by a jockey of the same age group. Here, you learn to ride at primary school age! Likewise, the length of each race depends on the age of the mount and can be anything from 12 to 35km.

When you see Mongolians hurtling past on horseback, you can tell it's in their blood! The sight of them on horseback, dressed in traditional costumes, is quite incredible. The winning horses are blessed with a blue scarf ( khata ) whilst the winning teams of breeder/jockey/horse are the toast of the town.

Mongolian wrestling is also a popular sport. Reminiscent of American catch wrestling, the events are as showy as they are energetic and numerous codes apply. Rituals play an important role in this combat sport. It's certainly a theatrical moment.

The wrestlers wear standard gear - shuudag (large briefs), zodog (bolero jacket) and traditional Mongolian boots. Before each match, the two competitors perform the traditional eagle dance as a show of prowess. They then take off their hats, put them aside and the battle commences. The competitor who touches the ground with any body part (apart from their feet, of course!) loses the round. The loser has to untie his bolero jacket and pass under the winner's arm. And, as he leaves the area, he has to slap his thighs.

The winner puts his hat back on and performs circles around the Mongolian flag. 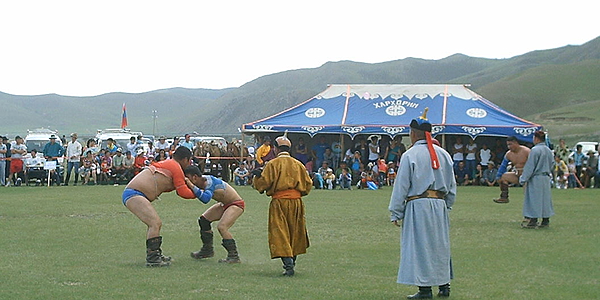 Archery is most popular in the capital. It's slowy falling off the festival agenda in rural towns, where its popularity is dwindling. At the same time, it's the only sport in which women can take part.

During any trip to Mongolia, a visit to the Naadam will be a truly magical experience. Whilst competitve sports are the main attraction, not all are the 'Manly Sports' and competitions include a Mongolian version of Tiddlywinks! It's also a food lover's paradise and numerous stands serve traditional dishes such as buzz and khushur. It's the perfect time to have fun at an event shrouded in tradition.

Even if the Naadam at Ulan Bator is the largest, those celebrated in rural towns, no matter how small, are welcoming gatherings.