Eagle hunting in the west: an ancestral tradition

The largest number of eagle hunters are found in Altaï, in Mongolia. An overview of this fascinating skill.

There are two Eagle festivals in Mongolia. One takes place around 15 September near the town of Sagsaï. The other takes place in Ölgii, on the first Sunday and Monday of October.

It is said that these festivals have existed for more than 2000 years. Originally they were to honour the hunting eagles who helped the Mongols (more precisely the Kazakhs) to get food during the winter Thus they ensured the protection of the spirits who guided their eagles towards their prey.

Today, it has become a national sport! There are around 500 participants, who are judged by a jury according to different criteria. Some competitive elements include: the speed of flight, accuracy in spotting prey, the technique of diving towards prey, the coordination between eagle and hunter … and other things besides. 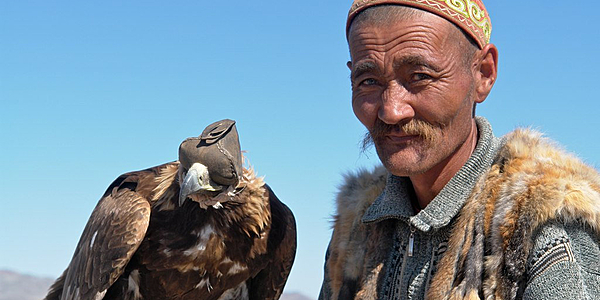 Information about the tradition

To become eagle hunters, young Kazakhs must be at least 13 years old. At this age, parents consider that they can bear the weight an adult eagle on their slender arms. Fathers teach their sons the art of eagle hunting.

The eagles ("burkhit" in Mongolian), are captured young, to learn to communicate with their new masters. So a young hunter starts off with a young eagle and they grow together. However, it is customary for the hunter to free his eagle after 8 years of working together. He goes to the top of a mountain, offers a dead sheep to his eagle and lets him fly away. With this gesture and offering, the Kazakhs ensure that the eagle has a long life, that it will breed and that its descendants will eventually return to the hunters. 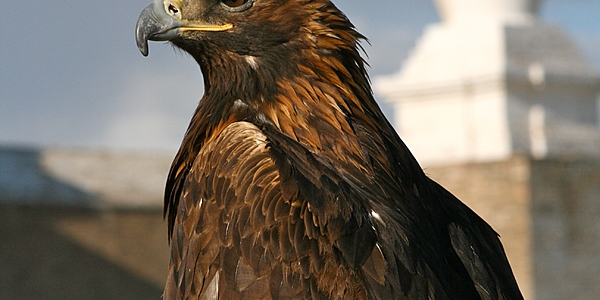 An ancestral tradition which has survived

Eagle hunting is one of the most ancient Mongolian traditions. However, it has to be said that it still exists today as it did thousands of years ago, … thanks to tourism!

Today's hunters no longer hunt all year round. They are mostly nomadic shepherds. The role of eagle hunter brings them a special status within their social group. They carry on the tradition.

I shall try to explain why they no longer hunt. Primarily because managing a herd is a lot easier! Also, because even if the Kazakhs of Altaï are far from civilization, there are markets nearby, and it is easy to buy what they need. In addition, the spoils of the hunt, such as foxes or marmots do not sell well at these markets. They will get a few pounds, but no more than £10. But doing a hunting demonstration for a group of tourists is very lucrative! The hunters have understood the importance of keeping this tradition alive, even though it is no longer of any use in their daily life. Tourists are happy to watch such a show and are ready to pay to see it.

So we can say that tourism has practically saved eagle hunting in Altaï.