After seeing the limestone Tsingys in the Ankarana National Park, go and explore another type of Tsingys, equally impressive, if not more. Dug by the Irodo River to the southeast of Diego Suarez, a red sandstone and laterite massif is gradually hollowed out to form a huge canyon. Encouraged by the deforestation suffered by the region, erosion has created huge red-ochre coloured formations called fairy chimneys at the foot of this canyon. ﻿

The Tsingys Rouges d’Irodo differ from their counterparts in the Ankarana and Bemaraha National Parks. These latter tsingys, carved in limestone, which you'll inevitably see during your trip to Madagascar, required many years to form the shape they have today, which they will continue to have for a long time. The Tsingys Rouges were formed from sandstone, marls and red laterite, which are not nearly as hard as limestone.

The type of soil from which they were dug, therefore, means much shorter time periods: here, erosion isn't measured over centuries, but rather in years. So, heavy rains or major floods can rapidly alter the landscape of the Tsingys Rouges, destroying some parts and creating new ones. If you come back to see these Tsingys from one year to another, it's very likely that you won't have identical photos, even if they were taken in the same place!

A 4L Rally in the Analamerana hills

To get there, you can book your round trip with one of the tour operators from Diego Suarez, which will bring you to the site in a 4 x 4. Or for a lot less money, you can also ask a taxi to take you there. However, not all of them will do it, because the road is in rather poor condition at the end of the trip.

Because of the poor conditions, it's almost a rally on a beaten sandy trail where it passes through dry woodlands and grassy valleys. From the ridge of these hills, you oversee the area and have a beautiful view of the sea and the Analamera Special Reserve. Plan a day to visit the site, half a day when starting early in the morning or in the afternoon. I recommend the second option, because the late afternoon light is particularly beautiful and give the Tsingys superb colours. 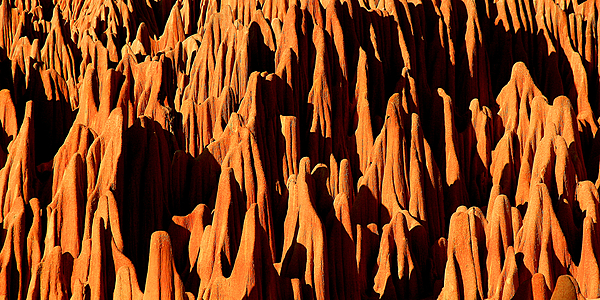 A canyon that is home to “chimney fairies” and a dragon

The Tsingys can be observed at 3 different sites that are accessible by car. The first allows you to admire these formations from the top of the canyon where they were created. Depending on the time of day, their colour can vary from white to red and yellow to ochre.

Next, the path continues so you can see a new view of these stone and sand giants. The second site has gigantic formations and a magnificent view of the canyon spread out in front of you. With a little imagination, you can see a huge dragon carved in the red sandstone - the landscape is just amazing.

Finally, it’s time to see what these "fairy chimneys" look like up close. For the third site, you’ll go down the canyon and walk along a little river to find yourself at the base of the Tsingys. Made from a softer material, these aren't as sharp as those made from limestone. Their shapes are softer and their tips are more blunt.