At 200km from Taiwan, Iriomote is the second largest island in the Okinawa region's Yaeyama Archipelago. It's famous throughout Japan for its marine life and primary rainforest that covers 90% of the territory.

You can get to Iriomote Island in about an hour, by catching a ferry from Ishigaki. Note that if there's a typhoon in the area, crossings may be cancelled. English isn't widely spoken, but locals will still try to strike up a conversation. Once there, you can get around by bike or car and bear in mind that an International Drivers Permit, translated into Japanese, is obligatory.

The famous white, sandy beaches on the Yaeyama Archipelago are stunning. But don't forget your sunscreen; this part of Japan is scorching hot. Once settled on a beach, you'll see hermit crabs of all sizes crawl out of their shells and try to pick fights with eachother! Small crabs are also aplenty.

Between the islands of Ishigaki and Iriomote, you'll find the largest coral reefs in Japan. You'll be able to spot tonnes of tropical fish, swimming around at only a dozen metres or so from the shore. Several of the beaches provide great snorkelling spots and you can hire the necessary kit on-site. If you don't plan to don a pair of flippers, make sure you wear plastic sandals, as the rocks and coral can be razor sharp. You'll find that the fish are curious little creatures - they won't hold back from coming up to try to nibble your fingers!

In the tropical rainforest

90% of the island is covered by lush jungle. There are numerous tours, which cater for all levels, so that you can explore the forest and mangroves. You can go on walking tours, or take a kayak/canoe down rivers that are lined with mangroves and waterfalls, all in the heart of the rainforest. 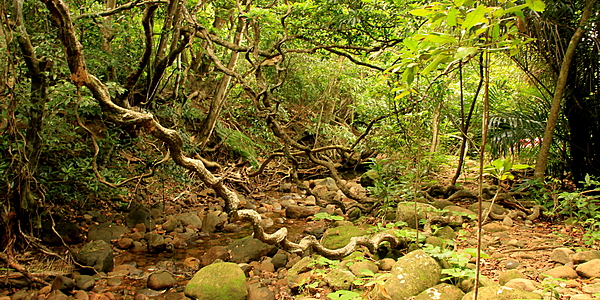 The plant and animal life is both rich and diverse . The coconut crabs that inhabit the island are particularly impressive - they're the largest of the terrestrial crustaceans, with a span of up to a metre and weighing a whopping 17kg. They can climb trees and break coconuts with their claws. I saw some at nightfall - they measured a good thirty centimetres and were quite timid. The Iriomote cat is a feline race endemic to the island; they resemble a leopard-like cat that was discovered in the 20th Century. They are extremely rare - about a hundred exist - and fearful, so only a lucky few will get to spot them.

Japan's first ecotourism organisation was founded on Iriomote, so as to protect the island's incredible natural heritage, as well as teach man to live in harmony with the environment.

Iriomote is one of the most beautiful parts of the Okinawa region. Spending a few days here will give you the chance to enjoy some superb diving and jungle hikes. You'll discover a Japan that's a far cry from what you'll see elsewhere during your trip to Japan - namely a striking, untouched wilderness.