Following in the footsteps of Buddhism in the Wakayama peninsula

Whether you're a Buddhist or not, discovering Koyasan and its surroundings will bring you closer to Japan's religious heart and help you to better understand its people.

Koyasan monastery was founded in 816 by the monk Kobo Daishi, or Kukai, on his return from China. He was the first to build a set of esoteric Shingon Buddhist temples. This location was chosen because of its topography: 8 surrounding mountains take the shape of the lotus flower upon which Buddha sat.

Koyasan's most symbolic place is Okunoin . This huge cemetery sits under centuries-old trees and has a rather quiet and slightly mysterious atmosphere. One half of the cemetery is old, with moss-covered tombs of samurai and other personalities of the time. Small sculptures dedicated to the memory of deceased children abound. They are known as Jizos: some are grouped together in monuments, and some are hidden in the hollows of trees. The Kukai mausoleum lies at the bottom of the cemetery. The other half of the cemetery is newer. There are tombs of Japanese companies like Panasonic! More surprisingly, a tomb of fugus lies in the heart of the forest which honours these popular Japanese fish, and there's a termite monument which was built by an insecticide company for its victims! 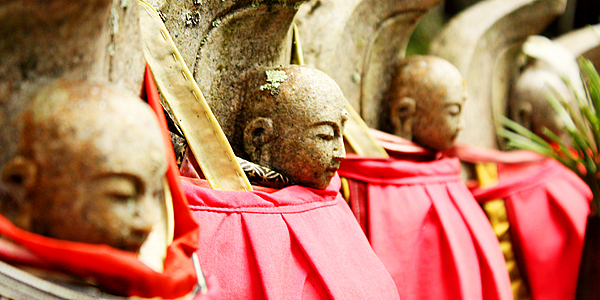 A city of temples

Throughout the city, there are several sets of temples and pagodas. If you so desire, you can attend a Buddhist initiation. It lasts about thirty minutes: you'll listen to sung prayers, and at the end of the ceremony you'll receive a certificate saying you took part. Several temples offer accommodation and one or two vegetarian meals served by monks. In the morning, when the clock strikes 5 or 6 o'clock (the exact time depends on the location), a bell signals the impending prayer. Before breakfast, you can go to the morning prayer which is sung by some of the monks.

The Kii peninsula mountains are covered in pilgrimage trails which lead to different temples or sacred places. Nachi waterfall is one of the highest in Japan and is a sacred place of Buddhism and Shintoism. The place is part of the Kumano Shrine, which also includes a pagoda and some temples. It is said that a giant three-legged crow protected the emperor who built a temple to thank the gods.

The atmosphere of Koyasan is very special. If you want to soak it up completely, then you'll probably need to factor in two full days. Whether in snow or in summer, this will be a highlight of your stay in Japan.