Kanazawa is located in Ishikawa Prefecture, north of Kyoto. Its name literally means "marsh of gold" in Japanese and thanks to its abundant rice harvest it was for a long time one of the richest and most prosperous regions in the country. Less touristy than Kyoto but with an ancient quarter just as fascinating as the former's, this city constitutes a very enjoyable place to visit when touring Japan.

A Japanese castle and gardens

Kanazawa castle was originally built in 1583 but later partly destroyed by fire. It was then reconstructed inside walls surrounded by moats. Included in the tour are videos and models explaining traditional construction methods. The castle's turret offers views out over the city.

Located close by is Kenrokuen, which counts amongst Japan's three most beautiful gardens and is one of the largest from the Edo period.

Nagamachi, the Samurai quarter, is bounded by a canal that extends all the way around it. The houses on its narrow streets are protected by rammed earth walls. The Nomura samurai house is well worth visiting, though not so much for the building itself as for its gardens, which are quite simply magnificent. Although it is quite a big place it is very tastefully laid out, with all the characteristic features of Japanese gardens to be found within it, i.e. lanterns, waterfalls, etc. The best time to see it is in the autumn, when the maples turn red.

There are several shops in the local area that sell pastries and traditional sweets. I particularly recommend the fukusamochis; and for those who like jellies, the yokans. 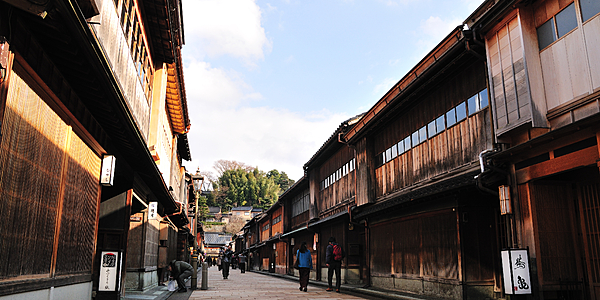 The geisha quarter is located on the other side of the river. Though particular houses can be visited, others have been turned into shops or restaurants with entrances masked by <noren (a traditional Japanese curtain). Performances of geisha shows take place several times a week, and during the daytime you may even encounter geishas – not necessarily made up – as they go from one house to another, or hear the sound of the a young girl practising the shamisen (a Japanese string instrument) through an open window. Many couples come to this quarter to have their wedding photos taken, dressing in magnificent kimonos just for the occasion.

At the Sakuda Gold & Silver Leaf Company you can purchase all kinds of objects gilded with gold leaf. This even includes a Gundam (a manga character)! You can also get teas and cakes containing gold leaf or flakes of gold. One of the walls is in fact completely covered in gold.

As in all Japanese cities, there are many temples here. One that stands out from the rest is Myoryuji. Because it contains a number of secret passages and camouflaged staircases, it is also known as the "Ninja Temple", though no ninjas have actually lived in it. The visit does have to be booked, but this can be done just a few minutes beforehand. The only option available is a guided tour in Japanese. However, they provide you with a printed guide in English at the entrance and this enables you to follow the tour without problem.

Allow two whole days for the visit to Kanazawa, and a little longer if you want to explore more of the local area, visit one of the city's many museums, or try your hand at pottery or any other traditional arts or crafts.