For a lot of travellers, Japan has become an obligatory stop on every exotic quest in the antipodes. Japan always surprises you, whether you love it or hate it.
14 quiet—uninhabited, even—islands form the Yaeyama Islands. Fauna, flora and coral: the country's southernmost archipelago has a lush setting thanks to its miraculously preserved spaces. It is an opportunity to immerse yourself in the peace and quiet of Japan, far from the hustle and bustle of the country's big cities, such as Tokyo.
A true retreat from the hectic pace of the cities during your trip to Japan.

The coral reef: a jewel among jewels

On this archipelago, it is difficult to avoid coming across a beach. After landing at the airport on Ishigaki Island—the only airport on these islands—, the first thing to explore could be this magnificent coral reef that guards the stretches of white sand. Some of the coral is very rare.

Whether you are on Ishigaki Island, Iriomote Island, or Taketomi Island, you will enjoy particularly lush vegetation where species of birds that do not exist anywhere else in the world sit at your feet! The archipelago is thus ideal for ornithologists and ecotourism in general, and your exploration could even take you to two islands that are still uninhabited: Ko Island and Uchibanari Island. 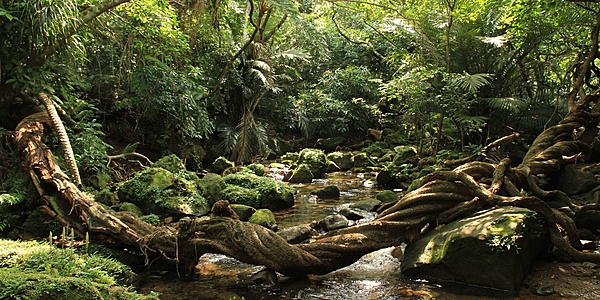 Among the archipelago's islands, one particularly stands out: Iriomote. With a jungle of subtropical vegetation covering almost its entire surface, Iriomote offers many hiking trails in this still little-explored piece of nature.

Why not also go and explore the semi-autarkic island of Yubu after being driven there on board a cart pulled by buffalo across a ford? A guaranteed exotic experience!

Another distinctive feature of the island is the presence of a rare animal that is part of Japanese heritage: the Iriomote cat. Recognised in 1967 as a feline subspecies, this cat is protected by islands to prevent it from becoming extinct.

Also good to know: the first ecotourism association in Japan has been set up on the island thanks to the initiative of the Takemori Ryokan inn. Don't deprive yourself; spend the night.