Quebec and Montreal, the two biggest towns in Quebec province, are the ideal starting place for an exploration of Canada!

For those who travel across Canada, Quebec City is the most "French" town in the whole of North America. The architecture is European, the people speak French, and everything (or nearly everything) looks like Europe. It's full of history and is the ideal place to fully understand what the province's motto really means: "I remember" (being born under the Lily and living under the Rose).

You can visit the town in any season but I have to admit that I think Quebec is prettiest in winter. With the snow falling in the alleys, the famous Château de Frontenac looking down on the town and the play of light. Summer is (also) a very pleasant season, with lots of festivals, natural attractions (like the Montmorency waterfalls) and the possibility of going walking or canoeing in the province's numerous natural parks, very close to the town. 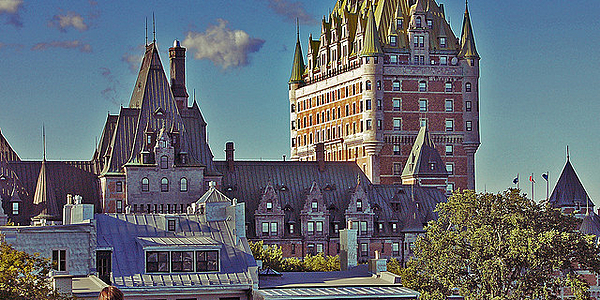 Finally, don't miss the numerous good museums all over the old town, inside the walls: they are great for all the family!

Montreal has a special status. Although everyone thinks the town is French speaking, in fact it is entirely bilingual, both English and French, in language and in culture.

Montreal is more of a North American town than Quebec and is planned on a grid, which is divided into neighbourhoods. Without doubt the most interesting are those next to Vieux Port, Mont Tremblant and Plateau, where French expatriates traditionally meet up.

During your trip to Canada, you really should go to Montreal and enjoy the activities there: shopping in the covered galleries, a Canadian NHL match in Bell Centre, trying poutine and maple syrup production at the sugar shacks, summer festivals and snowball fights in the winter!

If you want a bit of an adventure, Mont Tremblant and Parc Omega are beautiful places to visit before you set off west to explore the rest of the country.

Quebec and Montreal: the most beautiful ambassadors for French speaking Canada!