Alberta, one surprise after the other

If you're touring Canada in search of nature and those 'must-see' preserves, then you'll no doubt have put Jasper and Banff National Parks on your list. Both are world famous sites and you won't be disappointed by the hype!

Created in 1885, Banff is Canada's oldest national park. A classified UNESCO World Heritage Site, it's home to stunning mountain ranges and panoramic routes - the scenic Glacier SkyWalk being just one of many. With over five million visitors per year, coming to holiday and hike (and that's not including tourists who are just passing through!), it's one of the busiest parks; a thriving economy but not without risk to its plant and animal life... 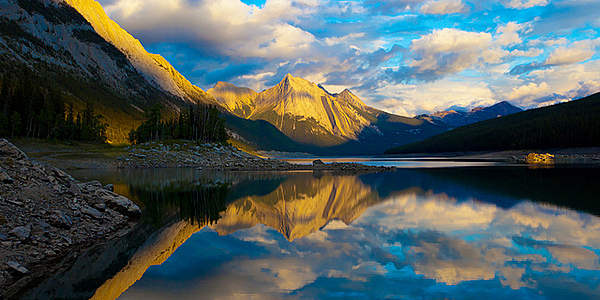 Jasper, to the north of Banff, is the largest national park in Canada. Covering over 10,000 kilometres it boasts the incredible Columbia Icefield as well as mineral rich thermal springs. A trip to Jasper will bring you face to face with lots of furry beasts! Bears, elks, wolverines, bighorn sheep, deer...

If one thing's for sure, these parks prove that Alberta is full of surprises!

So, you've put Alberta's five national parks on your itinerary, but what about changing tune and sampling a bit of city life? There's no shortage of big towns, with Edmonton and Calgary being just two appealing destinations during a trip to Canada!

Edmonton is home to the country's biggest shopping centre and the French Quarter's lively farmer's market. Even if the town is not particularly charming, it has great museums and shops!

More people, however, have heard of Calgary. Remember the Winter Olympics and 'Cool Runnings'? It's also the self-proclaimed Canadian rodeo capital (don't miss the Stampede!); a 'Texas of the North' boasting numerous attractions and events.

But be prepared for another surprise...winters in Alberta are REALLY cold!