Don't be like everyone else, don't go there just for the dolphins, but tell yourself rather that you will experience an old-fashioned, provincial outing in Kratié, in another time.

A 2 - 2 1/2 mile promenade, lined with trees, for revelling in the river's presence or to go for an early morning run, while being amazed at the Cambodians who get together for their morning exercises. Don’t think that the Mekong is a long tranquil river: just 4 miles upstream from the town, you'll find the Sambok rapids area, near Prek Khsor. Changes in the river are huge depending on the season, and you’ll have to consider this during your trip to Cambodia.

At this point, many islands emerge from the Mekong, and you can observe many birds and wild animals, including the famous freshwater dolphins, or the Irrawaddy dolphins. You can get to Stung Treng by waterway. Count on 5 to 8 hours to go the 100 miles separating the two cities, and expect to have a unique experience. Depending on the season, the ride will be more or less quick and dangerous. You'll pass through areas with sandbars, beaches and rapids. A glimpse of 4000 islands if you cross the Laotian border a little higher. 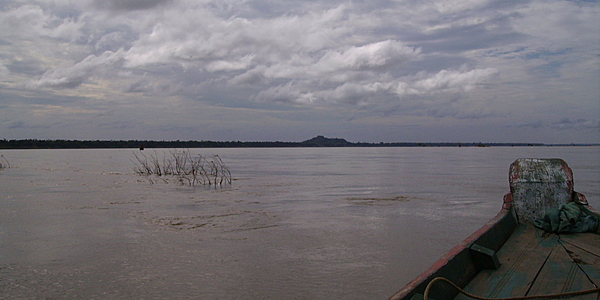 They are among Asia’s endangered animals. We can still find a few specimens in Laos and Burma, in the river of the same name. They largely suffered from hunting during the Khmer Rouge period, as well as from dynamite fishing.

We see them at Kampi, about 9 miles from Kratié, to the north of the city. It is difficult to see them and there's really no time to observe them. The morning and evening light is definitely more enjoyable, and temperatures are milder than in the middle of the day. People say that it’s easier to observe them during the dry season, from late November to April. But anyway, don't expect to see more than the tip of their nose, and from far away too.

If you get a group together, you can rent a boat for a little bit of cash. As for going to the pier, this might be a good idea for a nice bike ride on a pretty country road.

You understand that life in Kratié revolves around the river, but not only that. If you rent a bike, you can take a ferry to the island of Koh Trong, where there are only dirt trails. Local life is offered to you, in the form of floating villages of fishermen, farming plantations or getting together with families of the cham community. Like everywhere during your stay in Cambodia, when we venture off the beaten path, we get the chance to have experiences that are unusual and even in a bit of a different time. That will be the case with this getaway to Koh Trong, without a doubt.

And then, the only thing left when going to Kratie and Phnom Sombok is to get on the road to Kampi where you'll have a breathtaking view of the river. Not to mention Sambor, a pre-Angkorian town located 22 miles from the city. In summary, don't forget, besides being a required trip when heading towards Northeastern Cambodia, Kratié definitely has many areas of interest.