In order to be immersed in the heart of Khmer history, you have to take a trip to the colonial towns of Kampot and Kep during a trip to Cambodia.

An essential step during a visit to the city of Kampot is a stroll along the Sangker River. There are still some beautiful buildings dating from the colonial era: among the most representative buildings, I found that the Governor's Residence, a large yellow and very square building, was quite typical of this period. The former prison is also worth a visit.

Not far from Kampot, you'll find Bokor Mountain: it's a place that seems very special, because there are several ruins of buildings constructed during the 1930s, under the French protectorate. Among these monuments, there's a hotel and a church. These projects were never opened and are now completely abandoned. The view from this mountain is excellent, overlooking the sea and the island of Phu Quoc.

Several reconstruction projects have been announced, especially by Chinese groups, so now is the time to visit this region of Cambodia, which may get a complete makeover in several years. A huge casino hotel will soon be built in place of the French hotel, and it will all but cover the natural park. 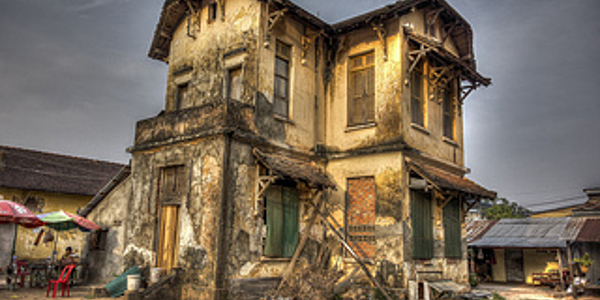 As for accommodations, many French people came and settled here to open charming hotels, some of which are absolutely gorgeous, built in wood in typical Khmer style, and are located directly on the river.

The city of Kep is often called Kep-sur-mer, to recall its past as a colonial French city. Even today, it's a city where many French expats have decided to settle, to open guesthouses, hotels and restaurants.

There are really only two streets in Kep, including one directly overlooking the seashore, which is dotted with local restaurants offering seafood and fresh fish, especially the crab market every morning. There are many very nice hotels nearby. Some of them have little bungalows in a big garden and are located a few minutes from Kep Beach.

As for architecture, there's nothing very interesting, because Kep doesn't have many buildings. The city is located just 30 minutes from Kampot, so it's mainly a seaside resort that was often visited by the French who lived in Kampot. So Kep is a perfect city for those who just want to take it easy.

Also of note: every major city in Cambodia still has traces from the colonial period. In Battambang, there are several streets similar to ones in Kampot. In Siem Reap, there is little more than the facade of the Raffles Hotel le Royal, and in Phnom Penh, the former French Quarter, especially with the old Post Office Square, also retains some beautiful reminders of the past.