A tour of the hidden temples of Angkor

The temples of Angkor are a collection of more than a thousand temples, so it is impossible to visit them all in one trip, or even in several. The majority of tourists only visit the most famous ones. Angkor Wat, the Bayon and also Ta Prohm, the famous temple in the trees from Tomb Raider. There are also architectural gems hidden in the Angkor complex!

Beng Mealea, Koh Ker and even Banteay Srei are less-known names for a traveller to Siem Reap. However, they are unique marvels of architecture that you should visit on any trip to Cambodia!

About three hours from the city, in the Siem Reap provinces, you will find the pre-Angkorian temple of Preah Vihear, which dates back to the 19th Century. It was built on a plateau and so offers superb views of the countryside. Go and watch the sun rise there - it's location gives you a superb view of the valley and the colours at that time of the day are sublime.

But there's no need to go that far! One hour from the city centre in the Angkor temple complex you will find the Beng Mealea temple, the structure of which it is said served as inspiration for the Angkor Wat temple. It was effectively built in the same way. However it has been abandoned for a while. This will make you feel like an explorer conquering previously unknown lands! You may have already seen this temple, as it played a part in the Jean-Jacques Annaud film Two Brothers.

Banteay Srei (meaning 'citadel of women' in English) is one of the temples where the architecture is more developed and considered. I would have been well prepared to wander round its low-reliefs and pink stone. It was definitely my favourite temple. In fact, it's the only temple carved from pink granite. 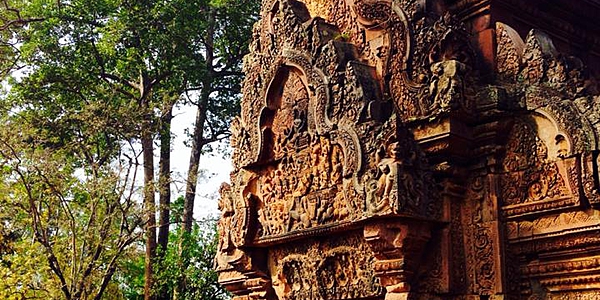 The Koh Ker temple is also very interesting as it was built in the shape of a pyramid, much like those in Egypt. This was one of the main temples in Cambodia during the reign of Khmer. It's a must-visit not only for lovers of old stone, but also silence! In fact, it is very rarely visited, and will take you far away from the tumult of Angkor. It really is something off the beaten track.