By travelling alone to Cambodia, I was able to feel a range of emotions in Battambang, a party city, as well as a city full of history and art! The numerous bars and art galleries that have opened in this city invite you to spend a few days there.

The city of Battambang, though second in the country in terms of population, is still a haven of peace where people live the good life, including strolling along the Sangke River, which runs through the city, or stopping at the central market, with its unusual architecture. It's an interesting destination during a stay in Cambodia.

But that’s not all: the city is worth getting lost in and that people stop there according to their desires! In fact, Battambang is becoming a choice destination especially for fans of art and exhibits. The Phare Ponleu Selpak NGO was established there especially to open a school for circus performance, painting and visual arts, and to enable disadvantaged children to express themselves in alternative ways. A circus performed by students is put on several days of the week. I've seen different troupes perform around five times, and I never get tired of this show!

In the city, the Lotus Bar and Gallery, a restaurant run by a nice expat, has set up an exhibition space upstairs. He also launched the Sammaki Art Space art gallery with some friends. He explains that he wanted to help revitalise the city, which has suffered a lot from the war and the Khmer Rouge. There is no doubt that in the near future, Battambang will become a well-known cultural city.

But Battambang is also a memorial place, including a visit to the mountain of Phnom Sampeau, the place where thousands of Khmers were massacred during the dictatorship. Today, it's a place of worship with beautiful views of the countryside.

It is also one of the cities where you will still notice reminders of French colonization: it's possible to take a bike tour in the city, stopping at the Governor's Residence, which was initially built by the Thais, and then inhabited by the French. It's a beautiful, massive building. 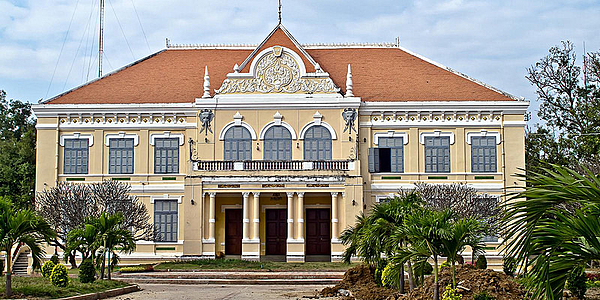 The central market is also a superb building with respect to the remains of colonisation, and a required visitin Battambangand Cambodia: it's a building typical of markets in Cambodia, with a ventilation system. Finally, several streets have retained the beautiful facades built during the French period.