Discover Recife and its surroundings

In Brazil, Recife is well know for it climate of insecurity but also for its proximity with the touristic cities or Olinda and Porto das Galinhas. However, by taking the time to stride along the roads of the capital of the Pernambuco State, you will discover a city that mixes modernity and history.

Recife, a city between two rivers

Between the River Capibaribe and the River Beberibe, the city of Recife was built on the Atlantic Ocean in the 16th century. In the historical centre, around Matriz de Santo Antonio, the colonial church built by the Dutch, the remains of the colonial era are erected. Coloured houses, Baroque constructions, the centre of Recife, although poorly maintained, is a place that I enjoyed walking around.

On the right bank of the River Capibaribe, not far from the Santo Antonio region, the Sao José market is one of the most famous in Brazil. In a 19th century building, infrequently visited by tourists but rather attracting the inhabitants of the city, this market is a true souk... There you will find everything that you could dream of: leather bags, traditional dolls of north-eastern Brazil as well as the most exotic fruits. I was touched by Recife, but it's a shame the city is troubled with security problems. I would advise against walking around there at night.

How can yo visit the Pernambuco State with stopping off at Olinda ? I strongly advise this required passage in your visit to north-east Brazil.
Due to its reputation, Recife serves mainly as a starting point for travellers to visit the surroundings. Barely 10km from the north, the town of Olinda, classed as a World Heritage Site by UNESCO, is a real gem.

Although the city's state of preservation is critical, the historical centre, founded in the 16th century by the Portuguese, then reconstructed by the Dutch in the 18th century, is an alliance of Baroque constructions and green gardens, all with a fabulous view of the Atlantic Ocean. The architecture of the city reminds visitors that the city was one of the jewels of the sugar cane industry in the north of Brazil.

60km south of Recife,beach lovers will find Porto das Galinhas, which has been listed, on several occasions, as one of the prettiest beaches in Brazil. 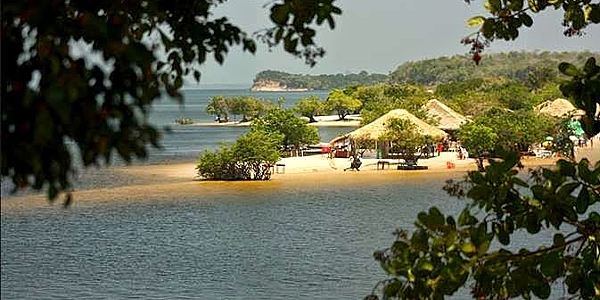 With an almost clear blue-green water, fine sand, and natural pools in water of almost 30 degrees, the beach is one of the most well known in Brazil. Slightly overcrowded in December/January and in July (Brazilian school holidays), Porto das Galinhas is even more enjoyable out of season. Once you have enjoyed the beach, take a "jangada" - a type of local boat - which will take you to one of the natural pools. Bathing in the warm water is an exceptional experience, whilst enjoying the view over the coastline.