The beauty of Zululand in South Africa

Follow me and explore a must-see of tourism in South Africa, Zululand and all its beauty. This is where it starts!

Many people confuse the region of Kwazulu-Natal and the 'Zulu Kingdom'. It's certainly true that Zululand covers nearly the whole of Kwazulu-Natal, but to be more precise and truthful, I should say that the former Zulu Kingdom covers the highlands and excludes the coastal area and the mountains of the Drakensberg.

The region is wilder than any other part of South Africa and the landscapes have a unique beauty which takes your breath away. If I add to that list, the mild and temperate climate, then there will no longer be any doubt, you have to go to 'Zulu Kingdom'.

It all begin in the city of Eshowe with the birth of Shaka Zulu, king of the Zulu Kingdom, in around 1787. He was above all an effective and innovative military leader who took advantage of the death of his father, the king, to seize power and found the Zulu nation. He lead the army with precise strategy and was a strict and authoritarian leader, winning many battles. He was so successful that the Zulu nation soon became an empire. Specialists believe that these tribal wars lead to the deaths of more than two million people. The tyranny, and the regime that he imposed with an iron fist, created increasingly powerful enemies in his family circle. In 1828 he was finally assassinated by his half brothers.

A king still reigns over the Zulu Kingdom today (fortunately, in a non-despotic manner), his name is His Majesty Goodwill Zwelithini. Zulu culture is still very marked in South Africa. It is a real source of pride and a fascinating subject to explore during a trip to South Africa.

Where to go in Zululand? 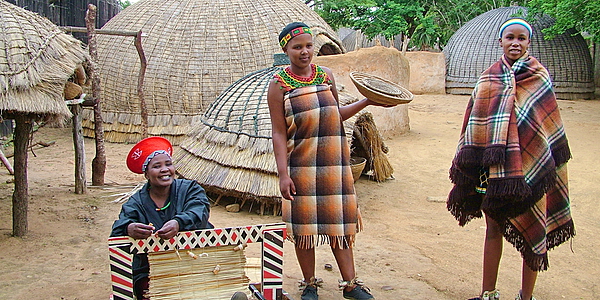 If you're looking for that essential stopping off pointwhere you can really soak up Zulu culture, head for Eshowe. This is where Shaka Zulu was born and the city is now considered to be the cradle of Zulu culture and the heart of a people.

For those who prefer walking amongst the hills that make up this fairytale landscape to visiting cities, I would advise you to head for Dundee or Ulundi. The former is a small and very attractive city with a rich past. From Dundee, you can explore some of the many battlefields where the Zulus, the British and the Boers fought and killed each other. As for Ulundi, it's less stuck in the past and a place to take a break from all that. It's also an ideal base to explore modern Zulu culture and the local wildlife. For example, Hluhluwe-Imfolozi Park is just 30 km away. This reserve dates back to the late 19th century and is the oldest wildlife park in the country and the biggest in Kwazulu-Natal. It's one of the major tourist sites in South Africa. It's smaller than the Kruger National Park and it's easier to see the Big 5 here. It holds the largest population of rhinos in the world. You're much more likely to see this creature which is so threatened by poachers.

To round off your trip to the Zululand nicely, you won't find a better place to visit than the city of St Lucia. it sits peacefully on the edge of the Indian Ocean and is a natural gateway to Cape Vidal and the Isimangaliso Wetland Park. Here the beauty is of a different kind to the rest of Zululand.