Best places to visit in Mongolia

Mongolia is landlocked between China, Russia and Kazakhstan, so does not border the ocean at any point. However, it has a striking variety of landscapes on offer! From Ulan Bator (or Ulaanbaatar), the capital city that never sleeps, to the darkest depths of the Altai mountains, travellers who have crossed this country will tell you exactly what to see and do here.

Mongolia is, above all, the home of Gengis Khan, the national hero. Many travellers set off retracing his footsteps up to the immense 40m statue in Tsonjin Boldog. Travelling along the Trans-Mongolian railway is also an absolute must! It crosses the country from the north to the south, and goes all the way to Beijing in the south and up to Russia in the north. Finally, one of the must-see locations is, without a doubt, Ulaanbataar. It is chock-full of museums, typical boutiques, markets, and with almost 1 million inhabitants, it is home to almost 1/3 of the Mongolian population.

Mongolia is also a very religious country. Buddhism and shamanism live alongside one another and the country has a very peaceful atmosphere about it. Nomads and shepherds remind us that, long ago, we too used to live among nature. You will be pleasantly surprised at just how hospitable its people are.

Spending a week with nomads is an unforgettable experience - living among them and like them, you'll be taken back to humanity's roots!
Set off to meet the Dukha people, a community of reindeer herders in the Taiga. A moment to remember. Finally, if you like a more active holiday, cross the Altai and its mountains or set off on horseback around the area. The best way to disconnect! 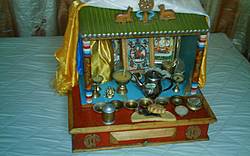 Dalandzadgad
1.5/5
Dalanzadgad, which is situated in southern Mongolia, is a departure point for the Gobi Desert and Yolyn Am. A mix of ugly Soviet-style buildings and traditional yurts, the town stretches across an arid, desert landscape.
12