Lying in the extreme west of Mongolia, next to the Chinese and Russian borders, Bayan-Ölgii is the highest aimag (province) in the whole country.

My suggestion:
The best way to get to this aimag is probably by flying from Ulaanbaatar. It is also possible to reach it by bus or jeep, but the journey is a long and tedious one of at least two days.
My review

The aimag (Mongolian province) of Bayan-Olgii is Kazakh territory, with Kayakh people accounting for almost 90% of its population. The opportunity to learn about a different side of Mongolian culture is what makes visiting this region especially interesting and enjoyable to me. The Kazakhs, who belong to the Muslim faith, have their own separate culture, and although they have continued to preserve the best Mongolian traditions where hospitality is concerned, spending time with this population when holidaying in Mongolia will still add to your all-round understanding of the country.

The local nomads are especially famous for their tradition of hunting with eagles. Although this type of hunting does exist elsewhere, it is estimated that 80% of all the world's eagle hunters reside in this region. It's also in this part of Mongolia that you can visit the country's highest mountains, especially at Altai Tavan Bogd National Park, where there are five peaks over 4,000 m high. 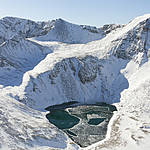 ©
Marion Dardé Photography
A 4x4 road trip in the Gobi Desert
See more
Experience added!
You can add more experiences to your trip itinerary before sending it to a local agency
View my trip itinerary