Jakarta's neighbour, Bogor is becoming swallowed up by the growth and development of its sister town and appears to be turning into a city suburb.

My suggestion:
Unable to protect itself from the metropolis's urban growth, it's becoming like all big towns, with pollution, noise and traffic jams on the rise. I recommend you visit during the week.
My review

When you think about it, Bogor's really not that interesting. You'll find it has more of a 'folkloric' can charm than Jakarta, as it's smaller, but overall the town is a mini version of its neighbour - noisy and disorderly.

If you're planning to go to Bogor, it will no doubt be to visit the famous gardens in the Kebun Raya Park.; a trip that is reason enough to visit the town. This huge, green expanse, which is in the heart of the town centre, is the perfect refuge from the surrounding urban chaos. When walking through the park I discovered several plant species, enjoyed the calm of an orchid pavillion and was surprised to find a miniature Taman Mexico desert. Then there was the star attraction - the sensational Bunga Bankai, a giant flower and the park's pride and joy.

In brief, Kebun Raya is a fun outing where you can learn about local plantlife and Indonesia's colonial past, as represented by the park itself. With a bit of luck, you may come across animals that live in the park, including herds of deer or monitor lizards lazing in the sun! 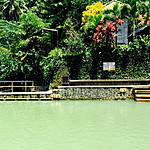 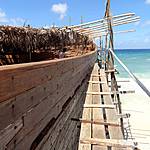 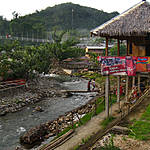