Bromo, the pearl of Java

Bromo is an unmissable part of your trip to Indonesia, not because it is the highest or most impressive of volcanoes, nor because it has its head in the clouds and only erupted recently. No, Bromo is called the pearl of Java, because it is the most beautiful volcano...in the world!

A moment out of time at Bromo volcano...

I have to say that it has what you need if you are looking for something new to explore. The immense, almost apocalyptic crater, with Mount Semeru, (Java's highest point, as well as one of its most active volcanoes), in the background, makes it sure to be a favourite.

To see the site in all its splendour you need to arrive very early in the morning. Because Bromo is most famous for its sunrises. So, of course, it's the moment when all the tourists want to be there. So you need to make a choice: either take a Jeep excursion, which will drive you to a great viewpoint from which the magic of the moment may be spoiled for you because of the crowds around you...or leave the village of Cemoro Lawang at 3 a.m. to climb up the sides of the mountain (along a path that officially doesn't exist but which the villagers will all show you), get a hot drink from the woman at the top, and wait for the magic to happen...

A walk around the crater?

Once the sun has lit the site you can get closer to Bromo, even climbing up the sides of the crater! The tour operators will drive you up but there are still 253 steps up to the volcano's summit...You can also get there on foot from Cemoro Lawang - a little over an hour's walk across the caldera, but watch out for sandstorms! Stop and look at the Hindu temple built in the caldera because you won't find many in Java - the area's inhabitants are still Hindu, although the majority of the island is Muslim. (The volcano's name comes from the name of the Hindu god of creation, Brahma.) 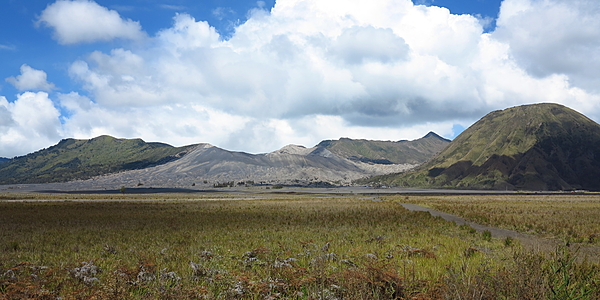 Once you arrive at the crater it's a moment to really enjoy the view. On one side you can see the steep side of the crater and the smoke escaping from it - Bromo is an active volcano - and on the other the valley, which you can easily imagine being subject to repeated eruptions.

For a perfect end to this stay in Java, you should see another unmissable volcano, Kawah Ijen, and/or try climbing Mount Semeru, which will take 2 days and lots of energy!

©
Flickr cc Jeffri Jaffar
Welcome to the Island of Gods and all its marvels.
More articles