Crossing over the arctic circle on Grimsey island

Grimsey is a small Icelandic island located about 25 miles north of Iceland and the arctic polar circle runs through it.

If you go to the north of Iceland, take advantage of this to hop on a plane or a ferry and cross over the mythical 66° North parallel of latitude. 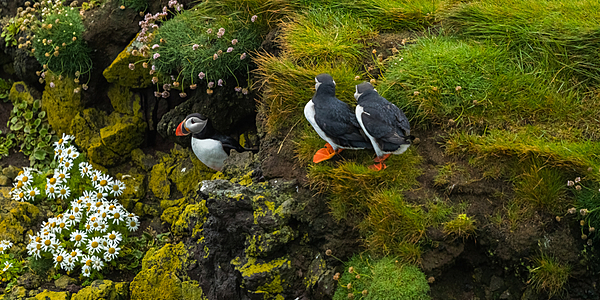 ©
Shutterstock
Getting to the island

This rather unknown island can be reached by plane from Akureyri (half an hour's flight) or from Dalvik by ferry. I decided to go with the boat option, the trip lasts 3 hours and 30 minutes and departure is at 9 o'clock. It was a day-trip and on the way back we were lucky enough to see two dolphins spring up in the middle of the sea. A visit to this island must be thought out ahead, as transport only operates three times a week.

The village itself is very small in size, it totals about 90 inhabitants who earn a living essentially by fishing. Nevertheless, aside from the runway and the harbour, there is a restaurant, a shop, a camping site, a few guest rooms... There is also a church built in the 19th century whose altar is a copy of one of Leonardo da Vinci's works.

Grimsey is the only place where you can cross the Arctic Polar Circle while on a trip to Iceland. Once you reach this point, a signpost signals the presence of this imaginary line and specifies the distance from this spot to the various capitals around the world. During your trip, you will be given a certificate to certify your crossing of the polar circle signed by the hand of the boat or plane's captain. This makes a pleasant souvenir for you to bring back.

An island populated with birds and seals 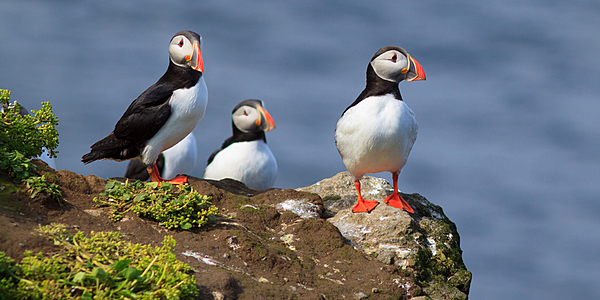 The island has an area of 2 sq ml and gives you the impression of being in a gigantic meadow filled with sheep. The high cliffs of Grimsey are populated by lots of birds : puffins, guillemots, penguins, arctic terns and many others. Plan on taking binoculars to watch the birds brooding or feeding their young in the nests situated on the sides of the cliffs. This will also give you an opportunity to see seal colonies getting a suntan on the beach or the young playing amidst the rocks. Whales sometimes venture quite close to the coast, as the sea is very rich in nutrients.

When you arrive on the island, take the path that runs alongside the coast heading north and then go eastward. The walk is superb and will give you the opportunity to watch the birds undisturbed as well as admire the magnificent landscape. 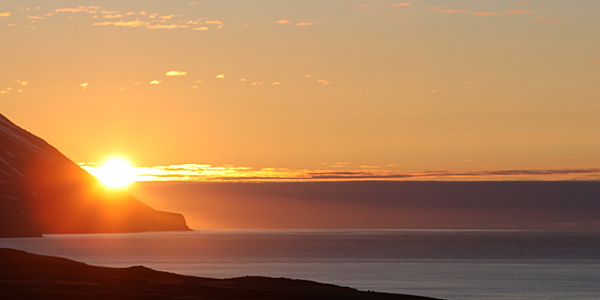 It is a good idea to spend the night on the spot around the summer solstice. Indeed, as Grimsey is the country's northernmost inhabited island, it is the perfect spot from which to observe the midnight sun or polar day. Elsewhere, in the south of the country, for example in Reykjavik, you can experience the phenomenon of white nights where the twilight is continuous, but not the midnight sun which goes down below the horizon before climbing back up. Activities and tasting of local products are set up for the occasion.

The excursion to Grimsey is well worth a day's detour, in fact two days around the 21st of June so you can celebrate the arrival of summer and the midnight sun.