The capital of the Middle Kingdom and the soul of China at its most simple.

My suggestion:
Don't go on the subway during rush hour and don't spend more than a week in the city which is very polluted.
My review

I spent a few days there and was fascinated by the city's absorption in politics and ideology. China's capital is home to the magnificent Tiananmen Square and the Forbidden City, two symbols of Chinese power that I found really impressive.

I appreciated the (almost) fresh air in the park around the Temple of Heaven, a UNESCO World Heritage site, which is where the Beijingers go to play and practice Tai Chi.

And what a pleasure after 2 months of living in China to find restaurants that sold langoustine raviolis! A taste of home in Nanluogu Xiang that I won't forget in a hurry. Much better than the scorpions and spiders at Donghuamen night market... 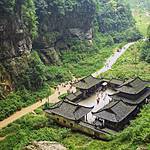