Design your perfect Fall vacation in Armenia with a local expert
Customize a tour idea created by one of our local agents based in the destination.
©
Shutterstock

Is Armenia the right destination for you?

Reviews from our travelers about their trip to Armenia

Armenia is currently an excellent place to visit. It has diverse landscapes, beautiful flora, and interesting birdlife. The people are friendly, food delicious, and facilities are all good.

Well balanced and organised trip by the local agent in Armenia + flexibility of the guide and driver to adapt the program in function of the weather conditions or religious celebration. As the trip in Armenia went so well, we had high expectations when we arrived in Georgia but we were disappointed by the organisation of the trip.

Armenia is one of Europe's best-kept secrets and an ideal destination for adventurous travelers. While under the radar for most travelers, Armenia has all the ingredients for a memorable trip. Expect an incredibly rich cultural heritage dating back to ancient times, mesmerizing landscapes, and unparalleled hospitality. Fall in Armenia is the best time of year to visit; after the summer heat cools down and before the cold winter kicks in, weather conditions are optimal for exploring this underrated, captivating country.

Why should I visit Armenia in fall?

Fall in Armenia is characterized by long, sunny days and mild temperatures. The cooler temperatures make this time of year particularly suitable for exploring the towns and cities, while the mountains are also accessible. Early fall is the harvest season, during which fresh fruits and vegetables appear everywhere. As the season progresses, trees change color, making for spectacular views at the country's national parks.

The best things to do in Armenia in fall

Fall is the perfect time to explore Armenia’s enthralling towns and national parks. A visit to some of the country's perfectly preserved ancient monasteries should also be on your agenda. There isn't a huge amount of infrastructure in place for travelers, so having a local guide is convenient when planning your trip and navigating the country.

Yerevan has a long history. The city is 28 years older than the historic capital of Italy, Rome, yet it's a surprisingly cosmopolitan city. Also known as the ‘Pink City’ for its characteristic rose-colored buildings, it abounds with busy town squares and buzzing cafés.

Dilijan is one of the most scenic destinations in the whole country, with hiking trails passing through flourishing forests and across rolling hills, revealing ancient hidden monasteries. In fall, the foliage turns to rich shades of yellow and orange.

Armenia has a 6,000-year-old wine-making tradition and the country's finest wines are produced in Areni. Late September and early October are the perfect times to visit the village's wineries, as this is when the grapes are harvested and bottles from previous years are tasted.

See a magical sunset at Noravank

Noravank, a 13th-century monastery decorated with intricate carvings and religious reliefs, is dramatically situated amid red-colored cliffs. At sunset, the rocks light up and create a magnificent backdrop to the stone church towers.

Traveling back in time at Geghard Monastery

Geghard Monastery, carved partially out of the mountain rock, dates back to the 4th century. Stepping into its dark tombs and chambers is an eerie but unmissable journey back in time. The monastery is said to house the lance that wounded Jesus on the cross.

Armenia has a continental climate, characterized by hot, dry summers and cold winters. While the summer heat can make sightseeing challenging, the winter sees heavy snowfall, forcing roads and sites to close down. In fall, temperatures are generally pleasantly cool and well-suited for sightseeing. Early fall, just after summer, is considered the best time of year to travel to Armenia. During late fall, approaching the winter, rainfall slowly increases and temperatures drop. 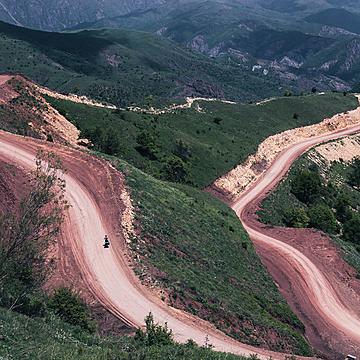 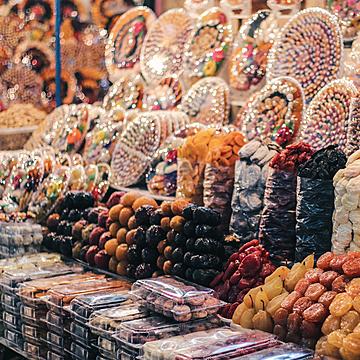 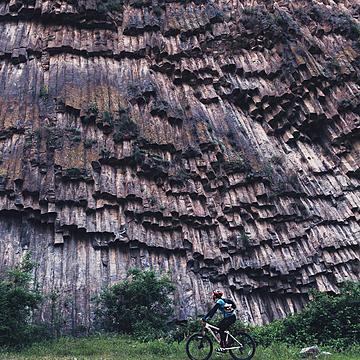 Cycling trips in Armenia
Experience added!
You can add more experiences to your trip itinerary before sending it to a local agency
View my trip itinerary