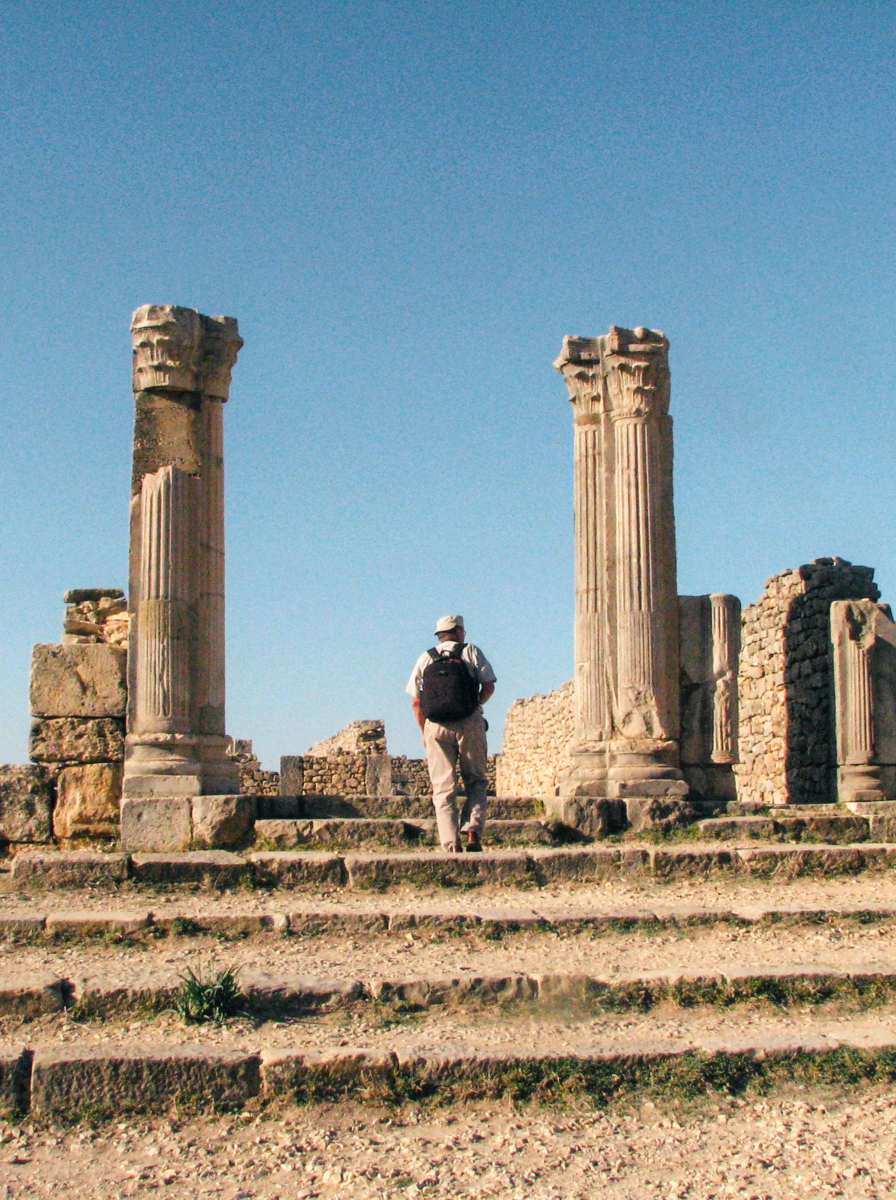 Close to Meknes, the ancient site of Volubilis is a Roman relic from the 3rdecenturyB.C. Conquered by the Arabs in the 7th century A.D. Volubilis is designated a UNESCO World Heritage Site.

My suggestion:
To visit Volubilis in peace and quiet, it's preferable to go there early in the morning or at the end of the afternoon. With a little bit of luck, you'll have a guide all to yourself!
My review

During my trip to Morocco, for my two hour visit, I had the feeling of being an amateur archaeologist, inching my way into the magic of a timeless place. The route is signposted with arrows, clockwise, over about thirty ruins.

For mosaic lovers, I recommend beginning the visit at the House of Orpheus: it contains 3 magnificent mosaics, including Orpheus charming animals with his lyre.

I loved the triumphal arch, erected in 217 in honour of the Emperor Caracalla.

Small list of relics to see in Volubilis: the olive presses, a main resource of the ancient city; the thermal baths of Gallien, to see the ground heating system of Roman baths; the Capitol dedicated to the triad of Jupiter, Pluto and Minerva; the basilica and the forum.

Volubilis is a pretty Berber city recognised as a UNESCO world heritage site and located in Northern Morocco, near Meknès.

My suggestion:
Aim to spend at least one night here in order to make the most of the calm atmosphere and beauty of the place. Staying with one of the residents is, in my opinion, the best way to discover the authentic Morocco.
My review

Even the name of this city sounds like it comes straight out of a fairytale: 'Volubilis'. And we were indeed thrilled with this city, steeped in history. Located at the foot of Djebel Zerhoun (a mountain over 1,000 m high), you'll find the remnants of several ancient civilisations, particularly the Roman civilisation. You'll be able to distinguish the site's different stages of occupation, from the prehistoric era to the Islamic period. Excavations on the site began in the 20th Century, and today, it's possible to view the remains of the Roman city, such as its thermal baths, basilica and Capitol. The mosaics along the length of the former main street are very well preserved and very impressive.

Volubilis offers spectacular views and a surprising sense of calm. Its inhabitants are very welcoming; once you meet them, you'll definitely want to extend your stay! It's also an ideal destination for a family holiday.