Kuantan province is altogether marvellous; you can go from a coastline where only a few small boats colour the white sand to a stretch of murky water sprinkled with flowering lotus all in the space of a day.

Close to Pahang River and west of Pekan, stretches lake Tasik Chini . There are many legends circulating about it... Some say that it was once inhabited by a creature called Naga, a monster who was killed by cannon fire by the English during the colonial era, others claim that sheltered in its depths are man-eating fish, no less; while others still, tell the story of a buried citadel: the inhabitants of old chose to sink their city under water rather than surrender. Be that as it may, lake Tasik Chini is spellbinding and on its waters, the nature enthusiast will spend countless hours...

On the nature side of things

The surrounding nature is staggering. You will just as easily come face to face with an elephant, a monkey, an iguana or a snake. Here is Nature with a capital letter and even though our Western eyes are duly impressed, you will come across Orang Asli who scarcely heed these peculiar beasts. This ethnic group who left the forest a long time ago, lives in the vicinity of the lake. You will no doubt pass the new generation on their way to school or paddling on the lake heading straight for the buried treasure.

Lake Tasik Chini is a hymn to life . You will see fish jumping, monkeys lounging about; you will hear birds chirping and between two lotus, you will squash a starving mosquito. If you wander around the lake, which I strongly advise you to do, you will be able to see vast stretches of land planted with oil palms and hevea. 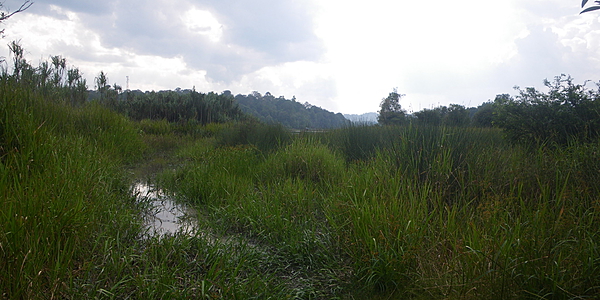 Tasik Chini province is ideal for those who seek to travel off the beaten track. Of course, the lake is mentioned in guides, but for whoever is travelling differently and is looking for serenity and a starlit sky, Tasik Chini is the best compromise. Plant lovers should slip their magnifying glass into their bag for the province holds a number of surprises in store for the curious botanist. As for the hiking enthusiast , to our great delight, a few Orang Asli have switched to tourism. Put on your shoes and slip on your gaiters, whether it be a night-time or daytime walk, the forests will surprise you and your guide - be careful not to lose him - will know to point out who goes where and why.

And good luck to you if an on the spur of the moment race takes place on the lake, as the children from around here have a very good paddle stroke! 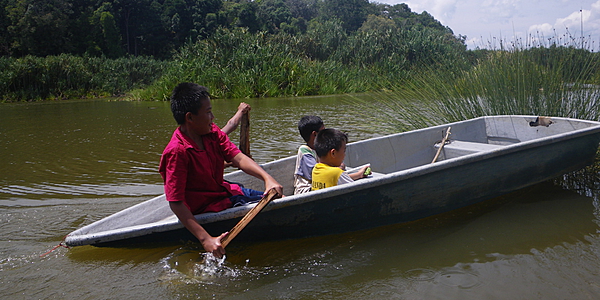