Along the Pan-American Highway, from Cotopaxi to Chimborazo

The Pan-American Highway was built in 1923 and crosses the entire American continent from Alaska to Chilean Patagonia and Argentina. Its length varies from 24,000 to 48,000km, depending on the source and survey method used. The Ecuadorean section of the Pan-American Highway stretches along 1,000km, between Tulcán on the Columbian border and Macara on the Peruvian side. Take the time to stop off at the towns and villages that line the 250km between the lofty summits of Cotopaxi and Chimborazo, Ecuador's highest peaks!

To the south of Quito, you'll find 'Coto'!

About 80km south of the capital, Quito, sits the majestic 5,897m high Cotopaxi volcano. Weather permitting, you'll spot its snowy peak the moment you leave Quito and head south along the Pan-American Highway. Cotopaxi is an active volcano and forms part of the national park that bears the same name. Volcanologists constantly monitor it whilstmountaineers and extreme sports fans undertake the gruelling 8-hour nocturnal climb to reach its peak in time for sunrise. Unsurprisingly, many throw in the towel along the way! You can always limit your climb to the first camp, which sits on the snow line - but be warned it's at a dizzying 4,800m altitude. 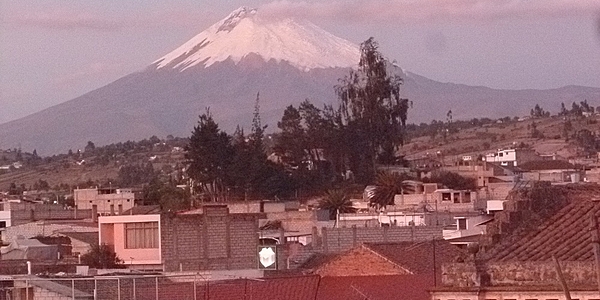 A few kilometres further south there's Latacunga, a pleasant medium-sized town. There's not a lot to see, but it's a calm place lined with typical colonial architecture. It's a great base for exploring the surrounding area including the Quilotoa Lagoon, a volcanic lake with turquoise water that sits at 4,000m. From here you can hike the 4-day Quilotoa Circuit, a series of walks that lead from one small village to another!

If you head 12km along the Pan-American Highway, you'll find the Saquisilli Market, a colourful, traditional, noisy animal market that's held every Thursday. A must-see for visitors who want to get off the beaten track and meet local people.

How about warming the bones a bit?

Moving towards Chimborazo, take a pit stop at Ambato or Baños, the latter being off the Pan-American Highway but well worth the detour! Its full name is Baños de Agua Santa and it's a thermal town fed by the sulphurous springs from the Tungurahua Volcano, an active volcano that periodically erupts... Being at 1,820m, it's warmer, the countryside is greener and there's a wealth of sporting activities on offer - riding, rafting and, best of all, bike trails that run along the amazing Waterfall Route!

So here we are, at the end of the line on the highest peak in the country - the vertiginous 6,310m Chimborazo ! As with Cotopaxi you can scale its heights, but it's a long, hard climb that requires a good level of fitness and mountain guides are obligatory. Another option is to head up to the first camp by car.

If you get that far, you'll have passed through the village of Guamote, nestled at the foot of the volcano. It's a quiet village except for Thursdays, when the weekly market springs to life and the Quito to Guayaquil train arrives - all round fun guaranteed!

If you've enjoyed this part of the journey, you'll be pleased to know that you can travel around Ecuador whatever the season, without a hitch. Bear in mind that in the 'Sierra' or highlands, you'll be at 3,000m minimum, so there's always a risk of headaches and you'll need to wrap up!

©
Alexandra Maillet
Cuyabeno, the jewel of the Amazon in Ecuador
More articles